Well this little place was amazing! We parked in a huge car park overlooking the village of Alquézar. WOW. The views are mesmerising. You can stay in the car park overnight, free of charge but there are no services. Alternatively there is a campsite further down the hill and you can walk to the town from there.

We had planned to stay 2 days as there are good walking trails from here. We were going to explore the village and do one trail on the first day then the longer trail the second day. The bloody weather decided what we were going to do in the end!! We managed to explore the cobbled narrow streets for a while then it started raining. 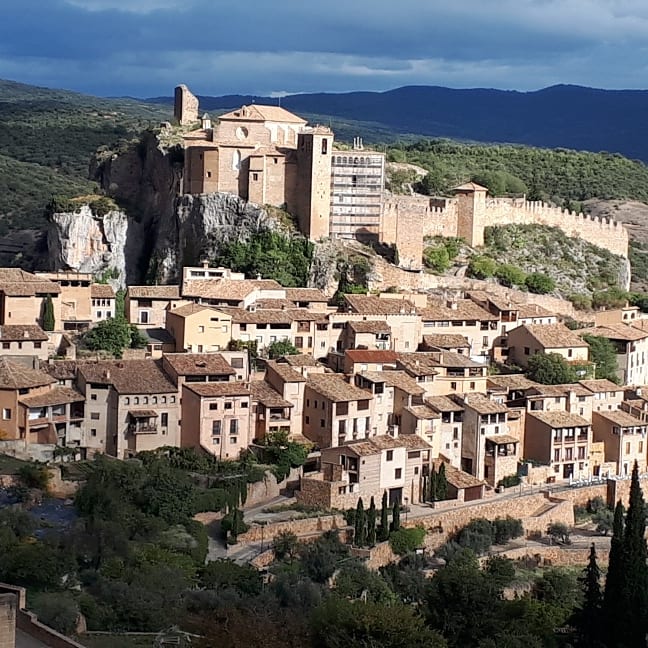 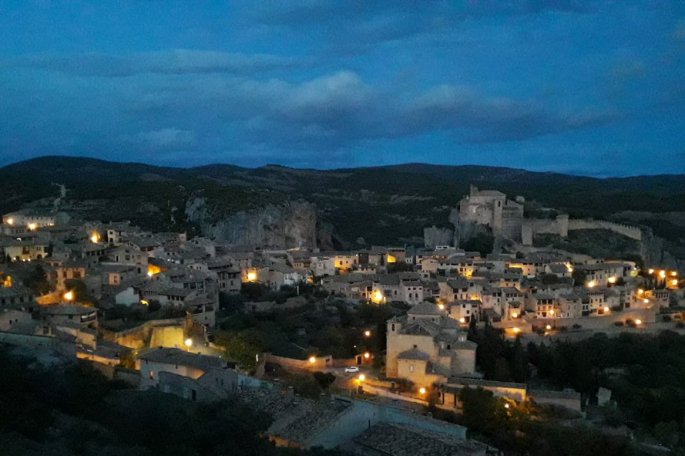 The rain never stopped, so we knew the following day was going to be tiring, as we had to do both walks. We’re not hiking enthusiasts, we just enjoy walking and seeing nice scenery. The sun was out, it was about 15 degrees, so perfect weather for walking. I took my walking poles, as my cartilage in my knees are shot to bits and I also have arthritis in them! The joys of getting older eh? 😣

The first walk took us above the mountain top village so we were able to get some great overhead shots of the buildings and surrounding area. It was a gentle walk, slowly uphill.

When we reached the top we came across a little oasis. It was for travellers to sit and enjoy the Roman style baths, with benches dotted around. Not sure if people actually went into the water but there were no signs saying not to.

On the walk back to the village Kev saw another path leading down towards what he thought was a look out point. The pathway was rugged, and filled with rocks and stones. I didn’t really fancy it, but it wasn’t far so off we went.

This “look out point” was a fence. The path carried on passed this, and we could see it lead to the bottom of the canyon, WAY below us. “Let’s have our lunch sat by the river” he says. Holy crap, the thought of walking down there, with my knees, gave me the heebie jeebies. My mum’s mantra was “feel the fear, and do it anyway”. She’s been dead 3 years and Kev still throws this at me, to get me to do things out of my comfort zone. “Think what your mum would say” he says, trying to cajole me. It worked. This video was from half way down the canyon.

We made our way slowly down, the views distracted me from the fear of falling 😂. 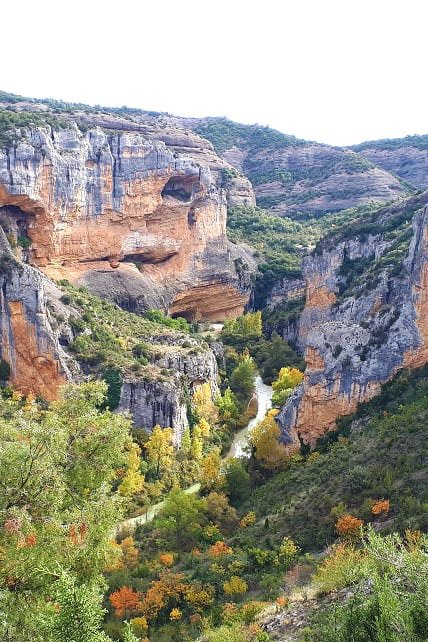 For the more experienced walker it would be easy. For me it was, slow but steady. Some places weren’t the best to get down but I persevered and reaped the rewards. 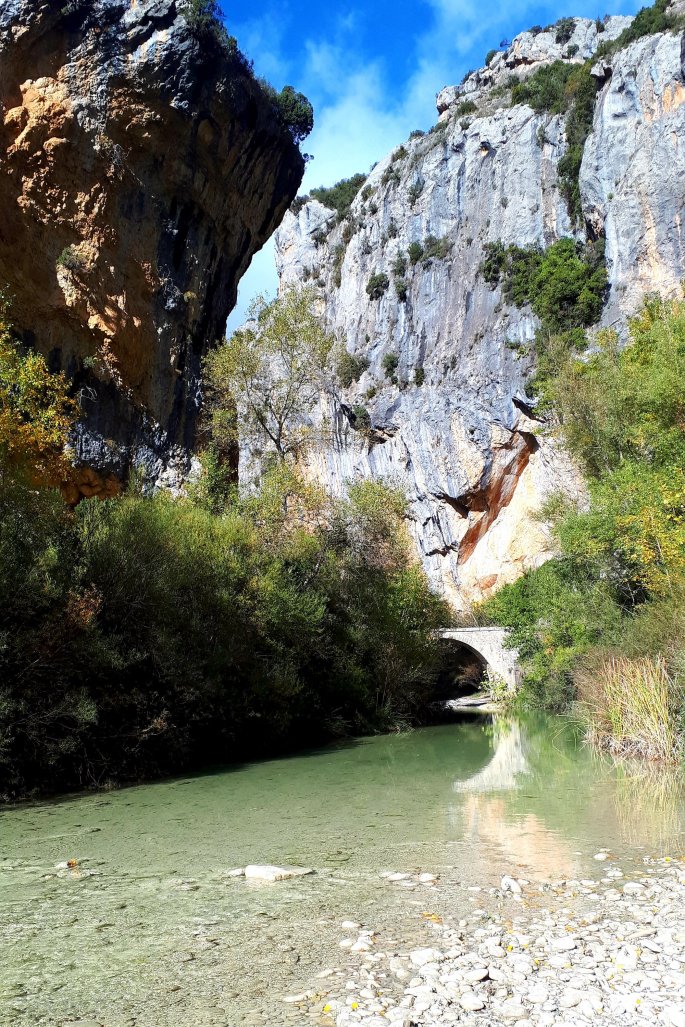 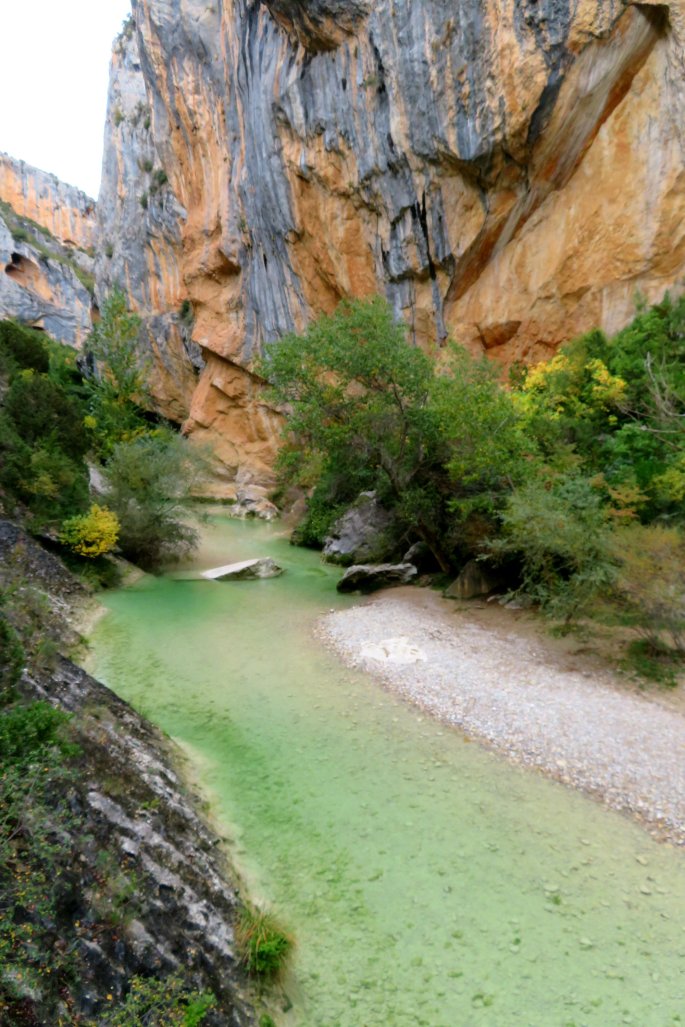 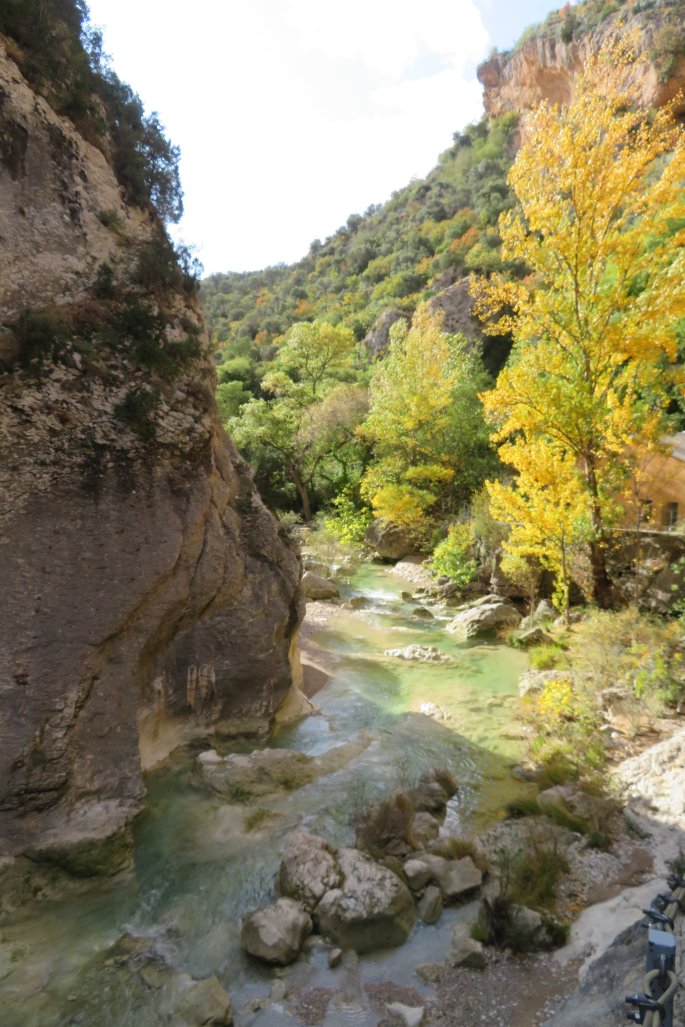 We sat and had lunch at the bottom. The water was so clear but very green. I was so proud of getting down there. I really didn’t think I could have done it. Now we had to climb back up! Ugh 😣.

By the time we got to the top my calves were in agony and we both needed a drink and to sit down. The local baker was open so we got a Caracola to share (round Danish style pastry with raisins in, topped with a clear icing). Twenty mins later we were buying tickets to do the second walk. It was only €4 and they provided you with a safety helmet, so as not to bang your head on the caves. In my stupidity I thought this was a flat walk along some platforms. Nope we had to go back down the bloody canyon to the river again 😮. My knees were like jelly, I was drained. Kev kept twittering at me, to shut up and go back to the motorhome. “I’ve heard enough from you today, go back and get out of my way, you do my head in” he shouted at me. He then points his finger at me and says “NO!”. Haha if anyone had heard him they’d think he was mad at me. He’s just a sarcastic git, and he makes me laugh. Not many would put up with him but after 34 years I’m used to him 🤣.

We carried on down to the bottom, along the platforms then back up to the village. Easy right? Haha. 28k steps, uphill and down the canyon twice, and my knees were saying “give me pain killers” 😂.

Later that night, I nodded off watching Game of Thrones 😮. Haha 8.20pm and I was ready for my bed. I made it until 10pm but then our comfy overcab bed was calling me 😴.

Our journey from here took us on more scenic roads. The lady in the tourist information office at Alquézar gave us some village names to visit in the Aragon area. We wanted to see as much of the area before the snow came.

We called in at Rodellar and walked to Pedruel, Boltaña, Bierge and Torrecuidad. There are a lot of canyons here, so its very popular with climbers. Here’s a few photos from the various places. 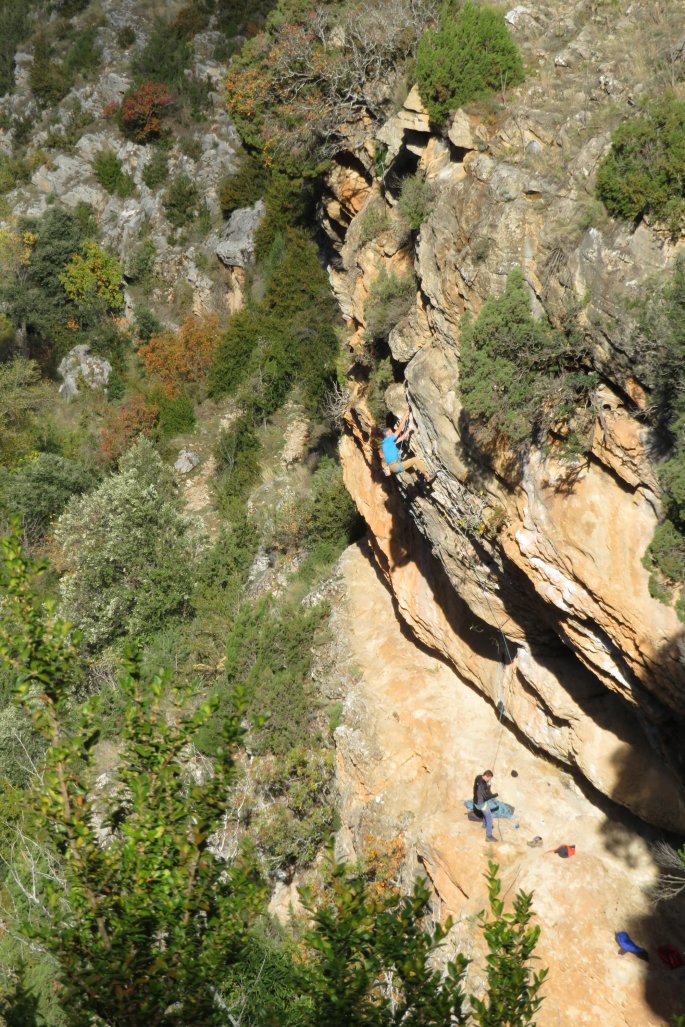 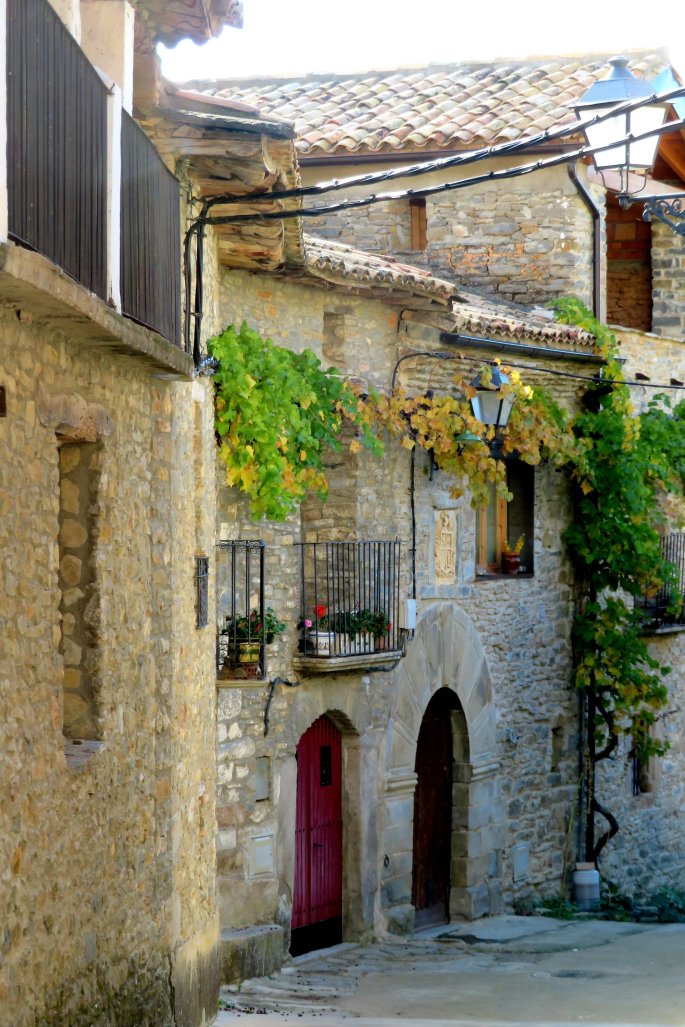 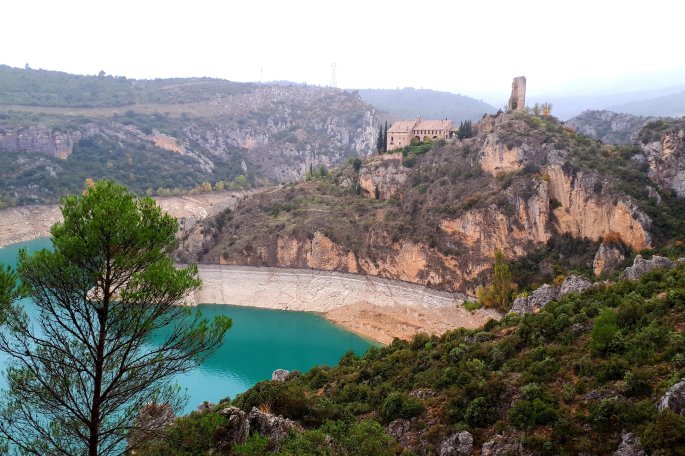 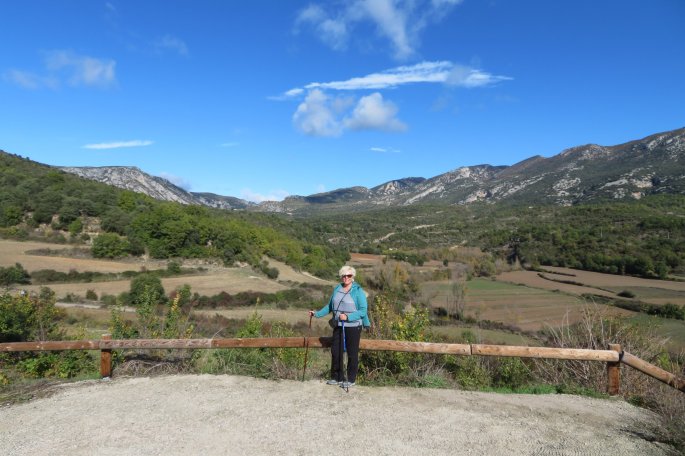 Our next stopover was in a place called Barbastro. The aire was at the side of a huge car park on the outskirts of town. It was “ok” but nothing special. We decided to wait until 6pm to go out and get evening shots, when the sky turns a deep blue. Well we were quite surprised once we walked into town. It was quite pleasant. The aire wasn’t on the app we use (Search for Sites) so I’ve sent details so hopefully many more people can benefit. 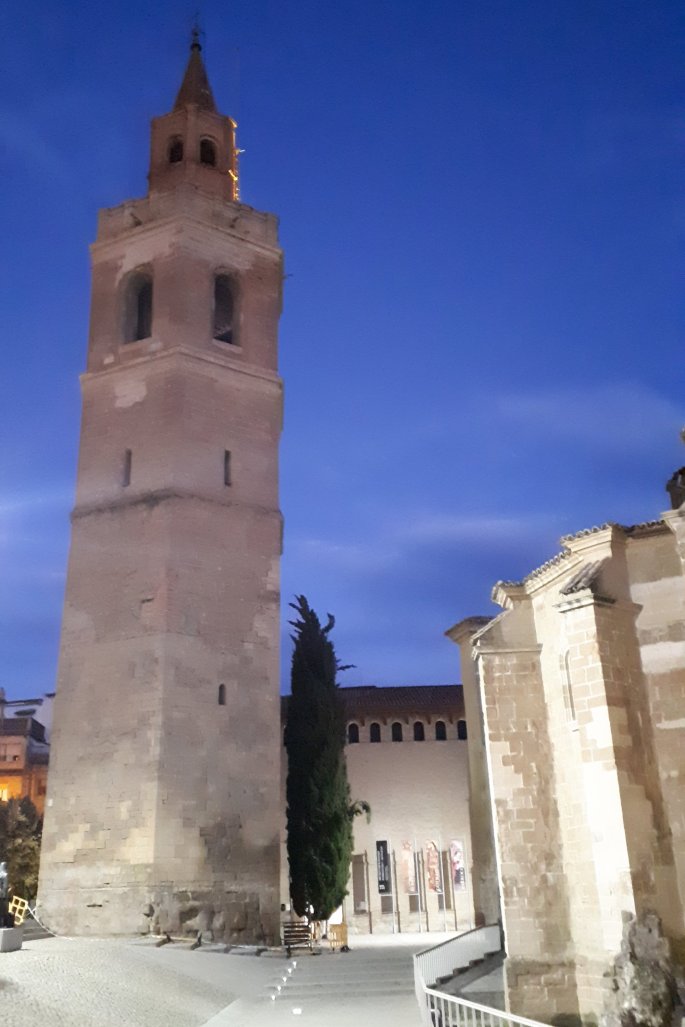 I wouldn’t make a point of visiting Barbastro but it was a good stop off before we got to our next overnight stop. We’d planned to head up into the Pyrenees but Kev was checking the weather forecast and the villages he wanted to see were scheduled to be covered in deep snow! It would have been amazing to see them, as we both love snow, but we don’t have winter tyres or snow chains. On our way out of here we called at a garage, got a replacement bulb fit in our headlight and got the brakes checked before we went any further into the mountains.

We wound our way through the narrow mountain roads. The scenery again was stunning. We nearly got hit by a car that came speeding round a bend. It had to swerve all over the road to avoid hitting us! We always drive slow round blind bends but now we went even slower. It was a good job as a huge wagon came rushing round the corner. Luckily we’d seen it so pulled in and stopped. His reactions didn’t kick in as quick and had to slam on the brakes. We nearly got ploughed into the side of the cliff. He was about 2 inch away from us. We were recoiling in our seats 😯. Here’s a few road shots. 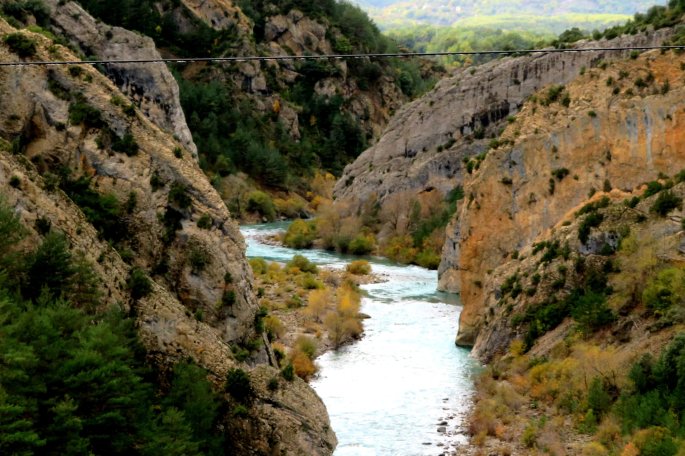 We went as far as Fiscal, on the edge of the sprawling mountains. Nothing much there, just a small village but had a huge campsite there, and some cute cows. 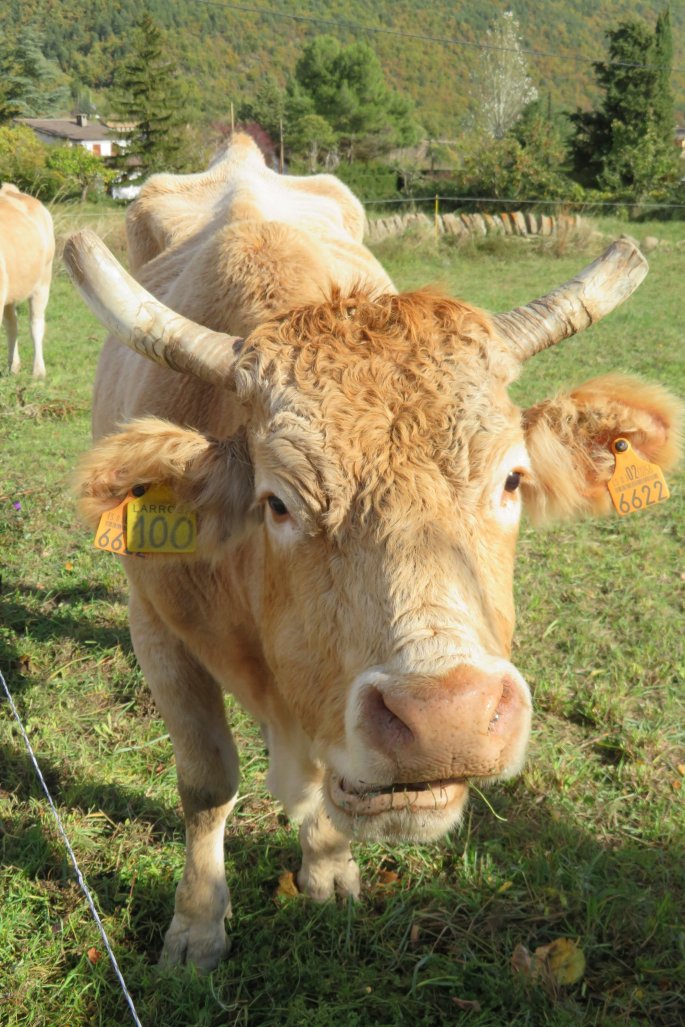 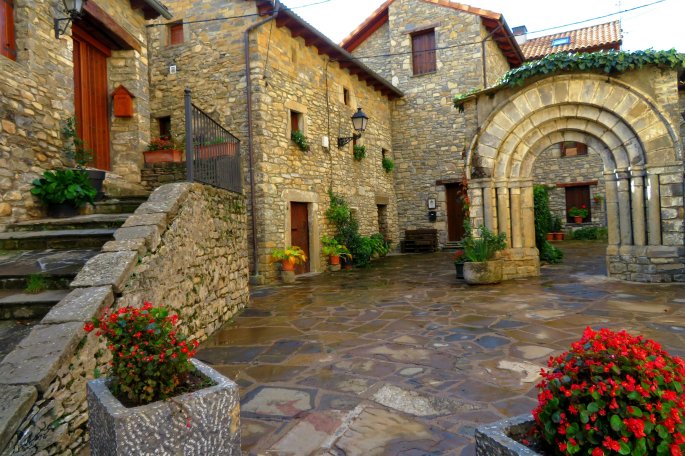 We walked on to another small village. I walk a lot slower than Kev but mostly he keeps to my pace. On the way back I was flagging a bit in the heat and the incline back to the motorhome. “I’m on first name terms with all the slugs round here, cos you walk so slow” he quips. I don’t answer him. He thinks he’s hilarious and if anyone laughs he just carries it on. He chuckles away to himself as he marches off 🤣.

We made our way back along the road, the same way we drove in. My stomach was in knots, dreading the traffic but we got through with no dramas. Phew!

Our stopover was in Ainsa. The aire was free overnight from 9pm to 11am and they charge 50c an hour through the day. It’s on the edge of the walled historic old town with amazing mountain views. What a find! We ended up staying 2 nights and somehow the parking meter messed up so it only cost us €3.75 for 48 hours! 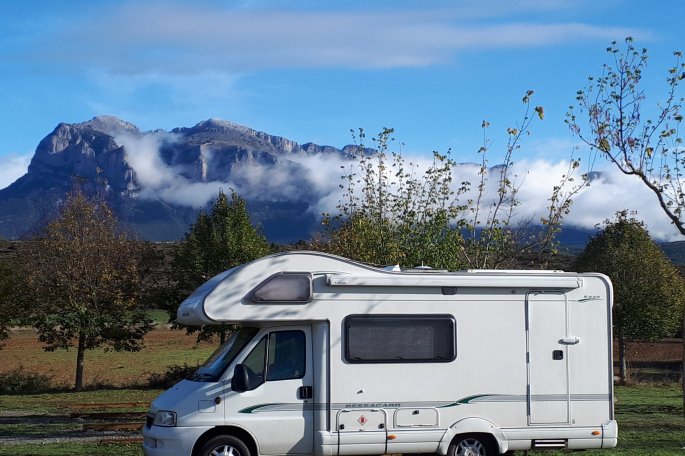 The walled old town was beautiful. We actually preferred it by night than day, photography wise. 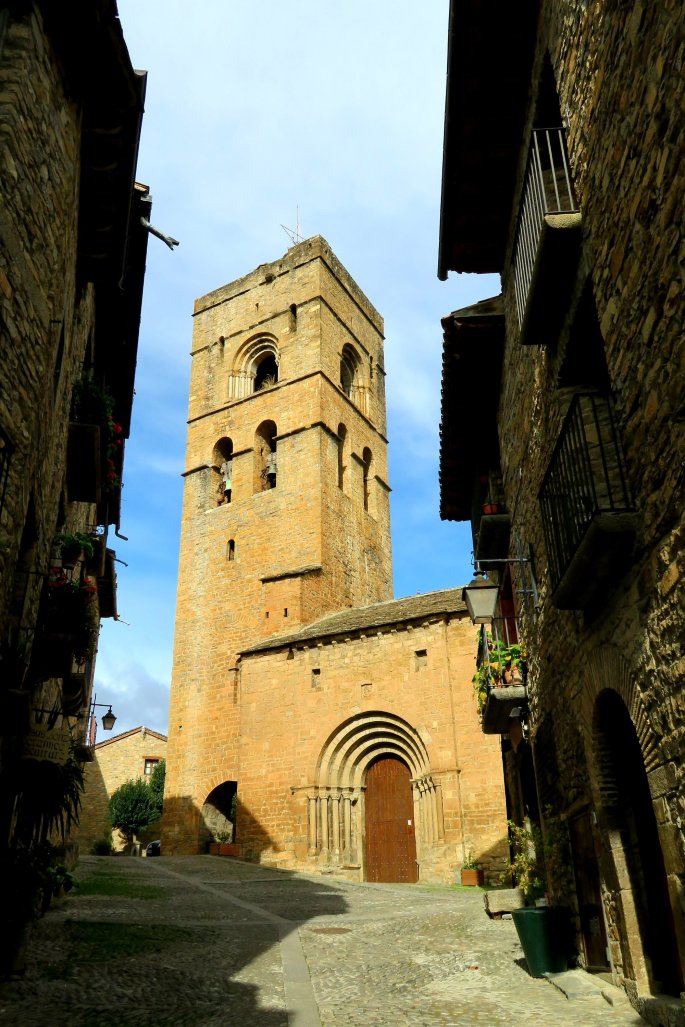 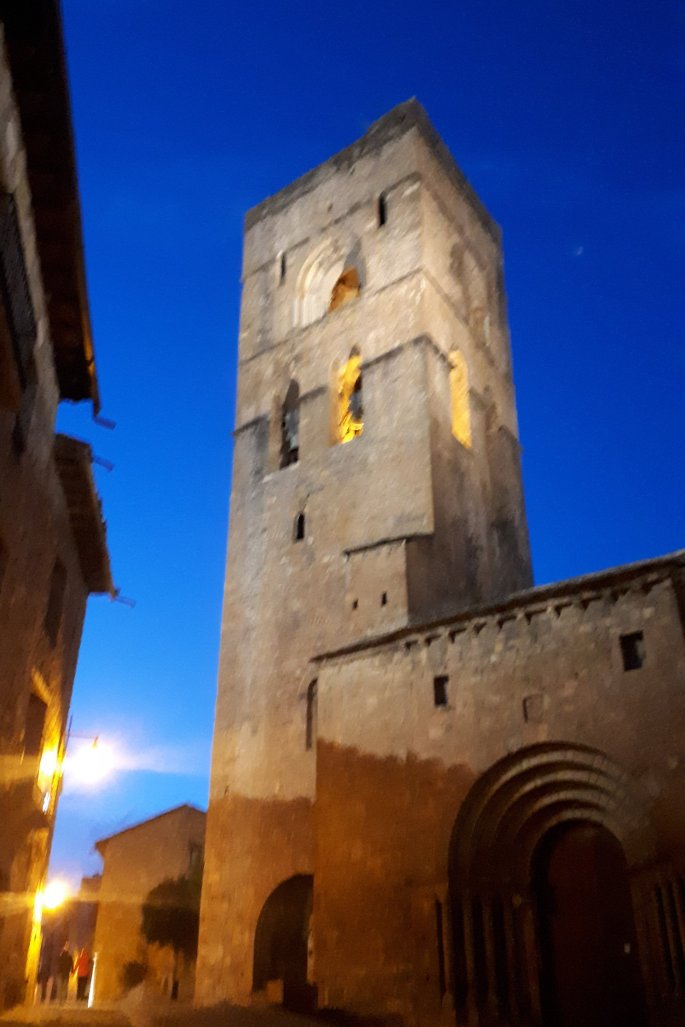 If you climb the walls you have breathtaking views of the surrounding mountains, some of which were covered in snow. By the side of the town runs a a threaded river with deep blue/green water flowing quickly down towards a huge lake. 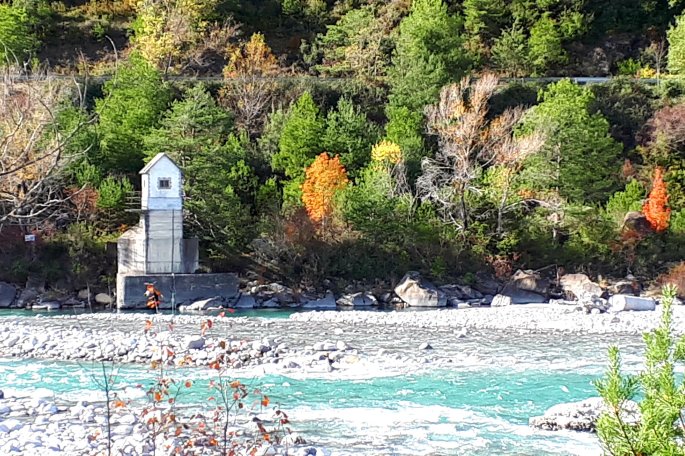 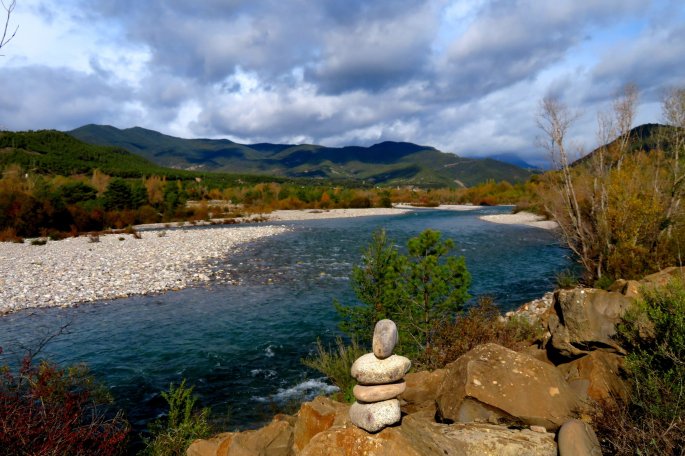 On the second night the temperature plummeted. By 5pm it was bitterly cold. Kev, being a typical Yorkshire man thought it was hilarious to surround me with “radiators” to keep me warm 😂. “The heating doesn’t go on until tonight” he says. I would be cooking tea shortly and the oven was going on, so I could put up with it for half an hour. If I’d put the heating AND the oven on it would be far too hot inside.

When we lived in a house, he used to say we couldn’t have the heating on until November. Yeah whatever. He could say what he wanted. If me or the kids were cold the heating would be on whatever month it was 🤨😁. He has his strange ways. A roast dinner should only be eaten on a Sunday, Friday’s and Saturday meals should be “tasty”. Not sausage and mash or stew for example, it had to be a curry or chilli con carne. He got what he was given on whatever day it was! 😉🤣

On leaving Ainsa the sun was out, but it was freezing. The grass was white over with frost and the mountains….well what can I say..look at these beauties 😍 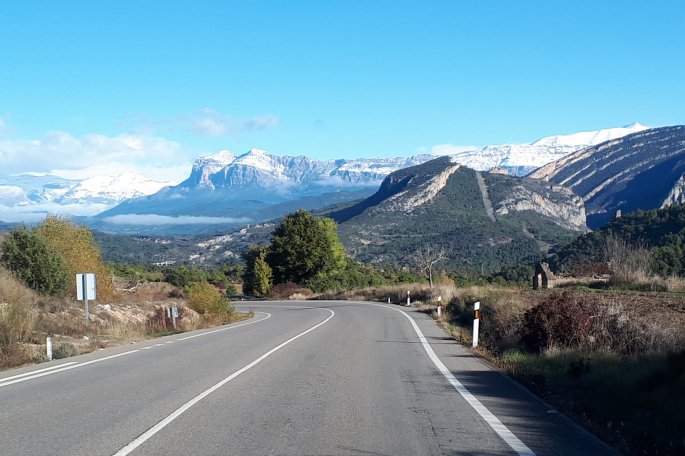 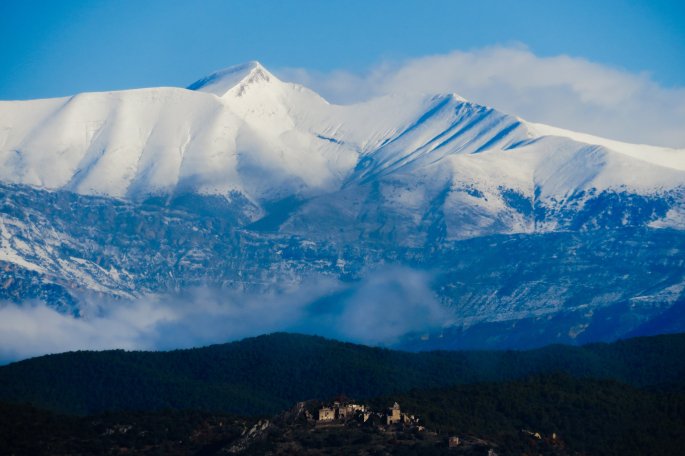 We’re heading for the coast now, so hopefully the temperature will rise a bit. We’ll definitely miss sights like this but have already made plans to tour more of this area next year with some friends.

If you’ve taken the time to read this, then thank you 😊. Please leave a “like” or comment at the end so I know who is reading the blogs.

13 thoughts on “Aragon and the Pyrenees”