We’ve found a few Aires that haven’t been listed in the Aires books, just general, pretty, car parks with no services. That’s the good thing in France in a motorhome, you can park anywhere a car can park, as long as there isn’t a sign saying “no camping car”.

Someone had turned the heat up and it was unbearably hot in the overcab bed on a night. We slept with every window open, and all the fly screens down. Didn’t stop the little sods getting in though. They must have crept through the gaps and when we put the lights on a night you could see them flying round. I had to kill ALL of them before going to bed! 🐜🕷.

We’ve visited quite a few places in the last 6 weeks. Most I’ve never heard of, but all have had something nice about them. Some we’ve just used as a stop off for lunch and others have been nice enough to stay the night.

We called in at Segré, had lunch, went for a wander around the town and set back off to find somewhere to stay the night. The place was like a ghost town. As Kev had said in our last blog, the places close down at lunch time for about 2.5 hours and everyone goes to sit outside a cafe/restaurant and catch up with friends whilst drinking wine and eating nice food.

The place we chose to stay the night was called Grez-Neuville. It wasn’t the town as much as the aire. It was right at the side of the river, with shady parking spots and not too busy. It was free to stay but had no service points.

The following morning we set off for Saumur. We’d planned to stay on a vineyard. It’s part of the France Passion scheme. You pay £26 for the year and have hundreds of places to choose from to stay the night. The last place we stayed was a cider farm 😊. It’s free to stay and you are not obliged to buy their produce. This scheme is only for campervans and motorhomes.

We stopped en route in Angers. This is a huge city with an old châteaux in the centre of town. The gardens are beautiful and very well kept. We didn’t go inside. The Pays de Loire is famous for it Châteaux so we’ve chosen specific ones to visit. We found a car park to stay in, it the Aires book but we we arrived you could only use it if you have had an Angers city pass, which cost €15 for the day! Pfftt. I don’t think so..the local football stadium just further along the road had ample parking so we left the motor home there for a few hours. 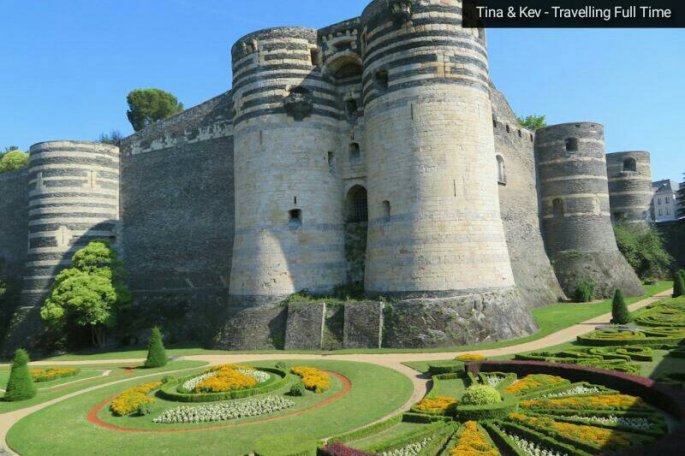 As we drove alongside the Loire River we saw a sign for a car park (for motorhomes) in a little place called La Menitré. We pulled in and asked the guy in the tourist office if we could stay the night there. “No problem” he says. It was a 2 minute walk to the river, had toilets and the little village was only a 10 minute walk away. The Mayor’s office below that was in the village, is a typical building. They’re all large, formal looking and surrounded by flowers.

We were running out of water on board so had to use it sparingly. We’ve sussed how to get a shower using less water than we would to wash the dishes 😉. We wet ourselves down with the water saving shower head, turn the water off, wash with shower gel then rinse off. Over and done in 5 mins haha. I’d just got out of the shower and was rubbing moisturiser into my legs. Kev was waiting to get passed me, so he could make a coffee. “Shift your big fat legs” he said, “They’re all battered and bruised and fat! They look like something a supermarket would sell off at 4pm on a Sunday!” 😲 He then stands in front of the mirror, with his hands on his hips, and a cheeky grin on his face, saying “Unlike me who’s as sexy as f*ck” 🤔. Hmm need to get a new mirror I think, or he needs to get to that famous opticians 🤓.

We’d picked up up a leaflet from the tourist office which advised to use the local road to travel along side, and enjoy the views of the Loire River, whilst being able to call in on the small villages en route.

Our first point of call was Saumur. It’s set along the side of the river with a large Chateaux set in the background, but which dominates the skyline. 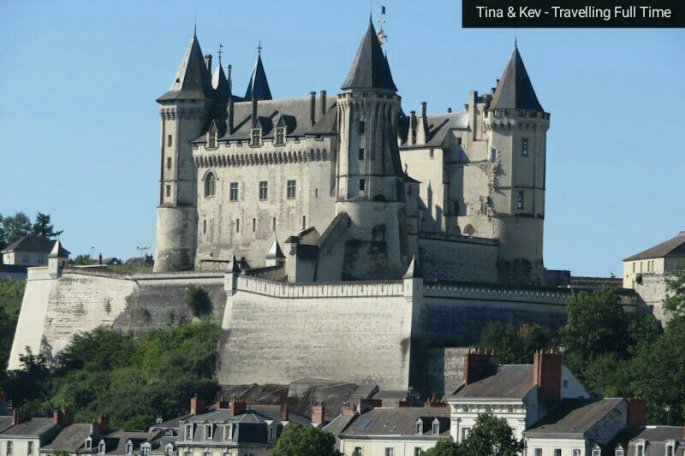 It has little streets with old, but beautifully architectured buildings in. You could get some great shots…if it wasn’t Saturday and it didn’t have a market on! 🤔 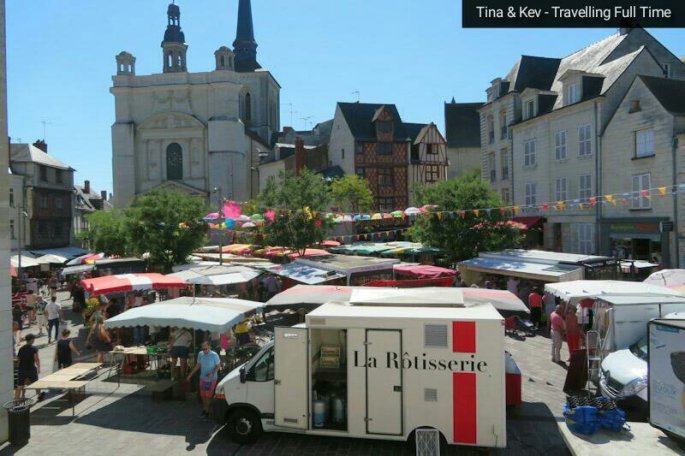 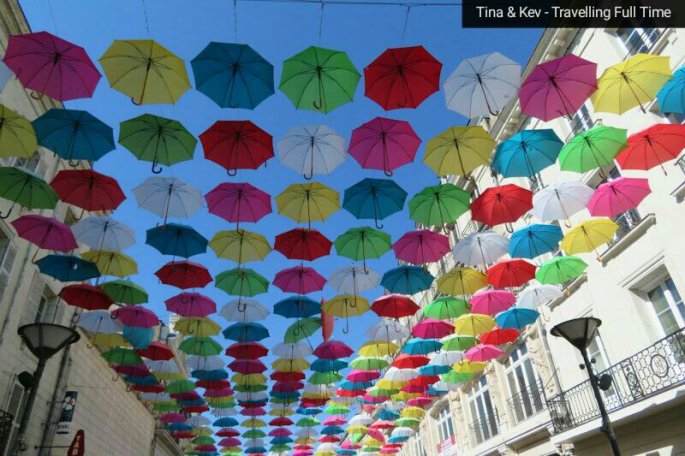 The best day to visit anywhere is Sunday or Monday. Shops are closed on both days so it’s ideal, but you have to plan Saturday for food etc as the supermarkets are closed Sunday in most places too.

We’d parked up on the outskirts of town and walked 15 mins to the centre. Always the best option in a motorhome. Kev still hasn’t learnt any more of the French language so I was teaching him to say “Je suis Anglais” ….”I am English”. We have had a few people trying to speak to us and he doesn’t have a clue what to say apart from “errrr” 😂. He’d finally got it, or so I thought. We were walking back to the motorhome and a French motorhome pulled on the side of the road, wound his window down and Kev went up to it. The guy said something in French and what was Kev’s response? … “errr. ….Eengleesh” 😂😂. More practice needed 😆.

We carried on following the road and saw a little place called Turquant. It’s known for it houses in the rocks, called Troglodyte houses.
This area of the Loire Valley is filled with caves and those people who lived in these caves were called Trodglodytes. They lived in these caves up until the late 1930s in this area. These are not your typical caves. The troglodyte caves were created when tufa limestone was removed to create the beautiful white stoned buildings and cathedrals in this part of France. Today, people are restoring these former dwellings and turning them into restaurants, shops, and B&Bs. 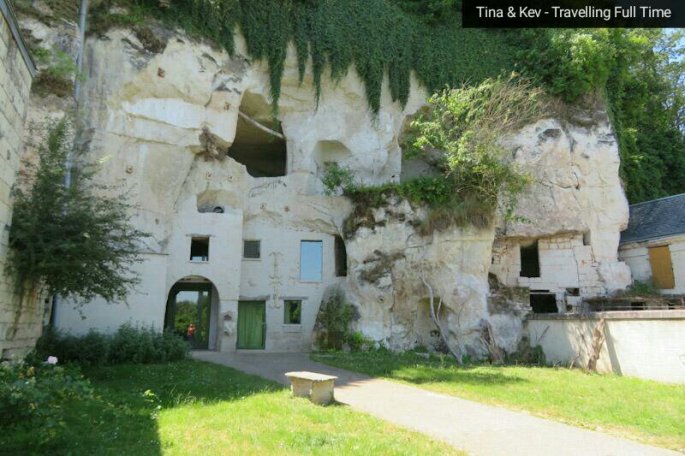 We left here and headed on to Chinon. By now it was 35 degrees and I’d had enough of the sun. The place was lovely though with a huge fortress, and winding streets filled with cafes, shops etc all running alongside the river. The place was pretty much deserted though, apart from the bars that were showing the France v Argentina game.

Above was our little lunch spot.

Our final destination for the day/night was going to be Villandry but we didn’t like the look of the aire, so we drove passed to find somewhere else. A few kilometres down the road was a gorgeous little place and for €9 with electric and for WiFi and gorgeous views, we were happy. There was only 2 of us staying on it too 😁. 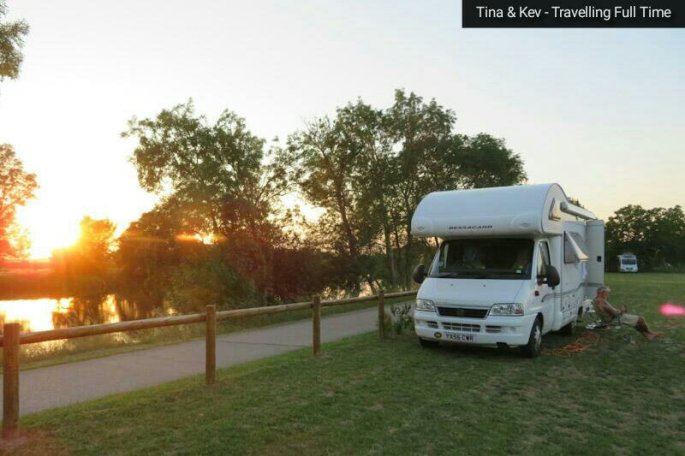 Sunday we walked the 3.7km cycle path from the aire to Villandry. Our first visit to a château. This one is known for its gardens. We decided to only visit the garden and not the inside. We weren’t disappointed. 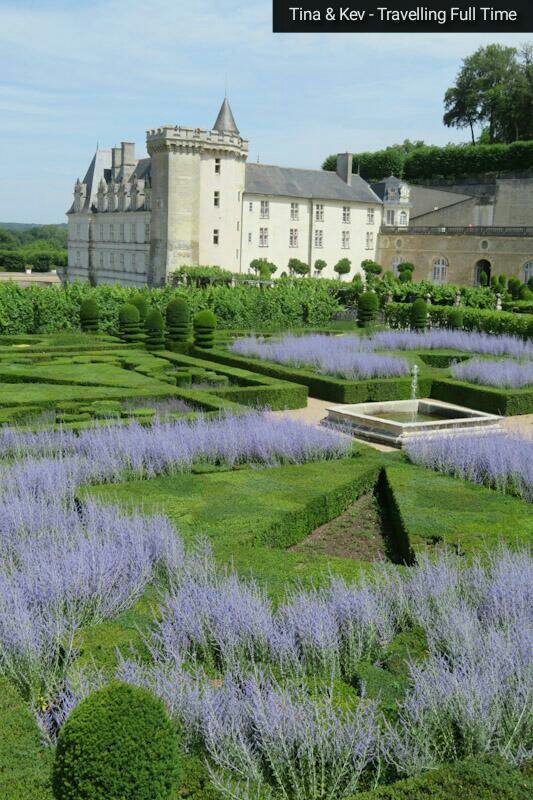 On the way back we passed some public toilets. Kev asked if I needed to use them before the long walk back. I didn’t so we carried on “home”. After about half an hour I needed the loo. “I’d told you to go before we set off” he jokingly admonished. “I didn’t need to go then, and I can make my own choices thanks” I replied, as we’re walking through the woodland. He swatted me on the top of my arm and said “I could take you in there and stove your head in with a large branch and no one would find you, if I buried you”. He didn’t finish there…. “Yeah she went out for a walk and never came back, I’ll tell them. I tried looking for her and shouting “Tina, Tina”. (He said in a whisper). “I’m distraught I don’t know where she is” 🤔. He then comes up beside me, which a big grin on his face, puts his arm around me and asks what the bank account details are! 😂 If he sees his 60th birthday later this month it will be a miracle

10 thoughts on “Following the Loire River in our Motorhome”