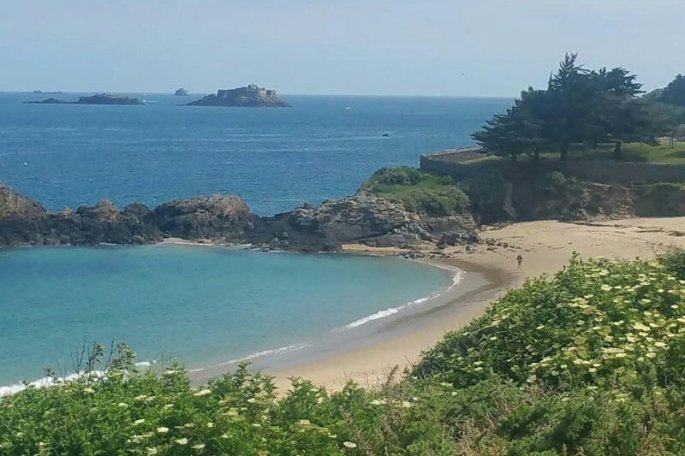 Our friends Michelle and Si were joining us for a week in Brittany. We’d booked onto Camping Longchamp 4* site. It was a bargain at €120 for the week. Michelle and Si paid £47 each return for their flights from East Midlands to Dinard and a one new room chalet is around €146 for the week.

The site itself is gorgeous. It had an indoor and outdoor swimming pool and water slides. Now the only thing was, we didn’t know that in France the men can’t wear swim shorts in the pool. It has to be speedos (or something without pockets)! 😮 I don’t think the men will be wearing those. Haha. The beach it is then!

We’d been shopping before we reached the camp so had stocked up with enough food for 3 days for the 4 of us. Thank god we had as the camp shop wasn’t up to much and was very expensive. They were charging €6 for a bottle of cider that we’d paid €3 for elsewhere. A nearby Lidl provided us with 4 days worth of food and drink for €40 per couple. 😮

First night’s evening meal was stir fried pork with peppers and onions, new potatoes and salad. We cooked at Michelle’s chalet as there was more room. She’d been given a welcome pack on arrival so I used their olive oil to cook the stiry fry with. I noticed it went white and frothy…..turned out it was olive perfumed cleaning fluid! Haha. We tasted it to see if it was palatable…..not a prayer! Well I wasn’t going to waste 8 pork steaks so I washed it under the tap 😂. Still no better, so we had new potatoes with salami, cheese, paté and crusty bread.

Oh I was getting ribbed all night for it “we’ll be starving by Thursday as we’ll have no more cleaning fluid left”, “we’ll have the cleanest insides ever, won’t need colonic irrigation”….the jokes kept coming as we polished off a case of cider. We got asked to be quiet at 10pm as it was “quiet time” and we were sat outside laughing…..oops 😂.

I’d told Michelle to bring some comfy walking shoes with her as I knew we’d be off exploring. She was adamant she wasn’t doing any hiking so brought some birkenstocks and a pair of converse pumps.

The next day we decided to walk to the next village called Saint Briac. It was only 3.5km so would only take half an hour. Easy…or so we thought. Turns out the coastal path was up hill and down dale and was more like 1.5 hours of trekking. It had stunning views of the coastline and was very reminiscent of the Pembrokeshire Coast that we’d been to last year. It was warm but overcast, for which we were grateful as it’s not nice trekking in hot temperatures. 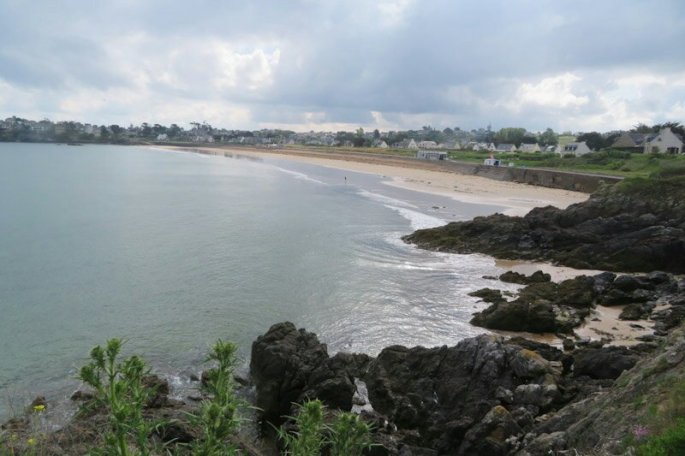 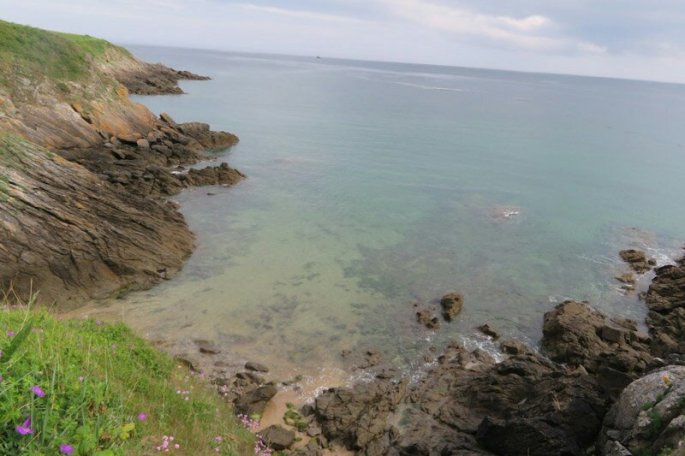 We’d taken a picnic so enjoyed our hard boiled eggs, crusty bread spread with Borsin and nectarines, whilst overlooking the sea. Perfect.

By the time we got to Saint Briac and had a wonder around the harbour, shops and the little centre, Michelle’s legs were giving up on her. She’d previously sprained her ankle and it still wasn’t 100% so was suffering. Her flat pumps didn’t help much either 🤔.

We let the boys take the coastal path back whilst we took the short cut via the road. When we reached the bay near the camp, we decided to sit on the steps and look out to sea. Now these weren’t normal sized steps, they were very deep. To get up onto one Michelle had to literally shove me up by pushing on my backside and then I had to drag her up by putting my arm under one of her armpits and pulling 😮. Not a pretty sight 😂.

We sat chatting and laughing. We giggle like school kids when we’re together. We don’t have any aires and graces, we’re very comfortable in each others company and can totally be ourselves. So here we were chatting about toilet habits and the conversation got quite in depth haha. What Michelle didn’t realise was, whilst she was telling me things in great detail, that a woman was stood behind us! Haha I just hope she was french and couldn’t understand us. 😯😄.

When the boys got back, covered in black flies from the coastal path, (thank God we didn’t go that way!) We walked barefoot down to the sea. It looked so inviting. The sun was out and the waves were gently rolling in to meet the shore. We paddled into it smiling away, until the baltic waters hit our feet. “Oh my god!” We both shrieked, plus a few expletives (so ladylike 😂) “it’s bloody freezing”. Can’t see us swimming in that! We took a few photos and headed back inland.

Evening meal tonight was cooked in the motor home as they didn’t have an oven in their chalet. Tandoori chicken wraps with peppers and onions, drizzled with a yoghurt and mint sauce, crunchy potato balls, with a garnish of salad. The only problem was that with having the oven, grill and also a pan on the go none of them were giving much heat out. Instead of char-gilled chicken I had to fry it in a pan, and the potato balls weren’t that crunchy 😅. At least it tasted nice this time.

Even though it hadn’t been very sunny, we’d all caught a tan but Michelle’s was the best. She’d had a cold shoulder top on and had lovely little red circles on the top of her arms where she’d burnt and her forehead was a rosy pink colour. She looked a corker 😉. We’d walked 11 miles that day and boy were we all suffering. It was going to be an early night for everyone.

We’d decided to take the local bus to Saint Malo, have a wonder around there then either get the ferry or the bus to Dinard before heading back to camp. Michelle’s ankles were still swollen from the flight and her bad ankle was playing up. We got the bus to Saint Malo but after walking for 20 mins, she had to admit defeat and headed back to the bus stop. We felt so sorry for her as she was missing a real treat with Saint Malo. What we didn’t realise until later was that there is another bus that runs from the station to the main part of town. 😕

Kev and I meandered along the cobbled streets within the walled city, then took in the views from the fortress walls before heading onto the beach. This place was stunning. It has a huge bay with a rocky coastline, scenic views from all angles. This is what we have been waiting for. As nice as Normandy was it didn’t make us say “wow”. This definitely did. 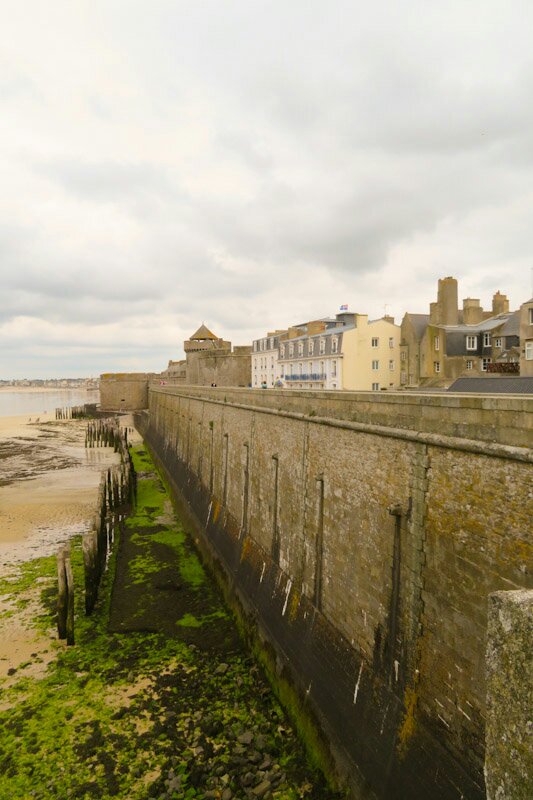 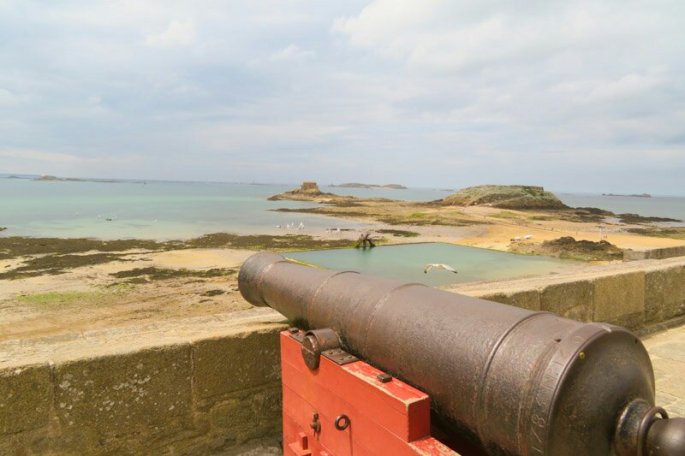 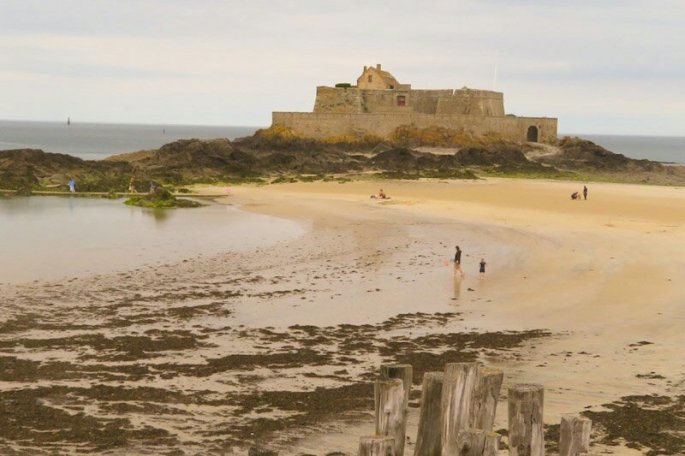 Michelle was cooking dinner tonight. Chilli con carne with rice, soured cream, grated cheese and crispy tortillas crumbled on top. Could this meal go right? If putting nutmeg, cinnamon, ginger and cloves into this Mexican dish is classed as being OK then it was perfect 😂. She’d got the wrong spices and wasn’t aware until she tasted it. A quick sprinkle of smoked paprika and it was back on track. As for the soured cream….she’d forgot to buy it so we used Greek natural yoghurt. As my mum used to say “make do and mend”.

We’d planned to stay by the pool the following day so Michelle could rest her legs. The clouds were thick, with no chance of the sun peeping through so we took the bus to Dinan. Oh my, what a fantastic place. Cobbled streets, mixed with green trees, terraced houses with roses creeping over their facades. It was picture postcard perfect. Kev said it reminded him of the old Hovis bread advert where the boy rides down the cobbled streets on his bike. 😊 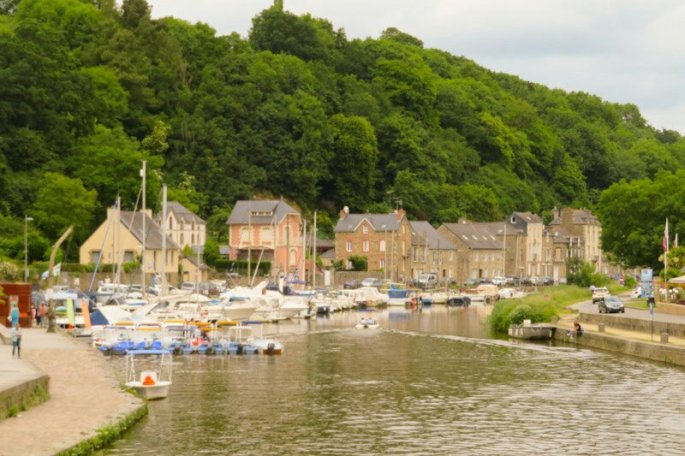 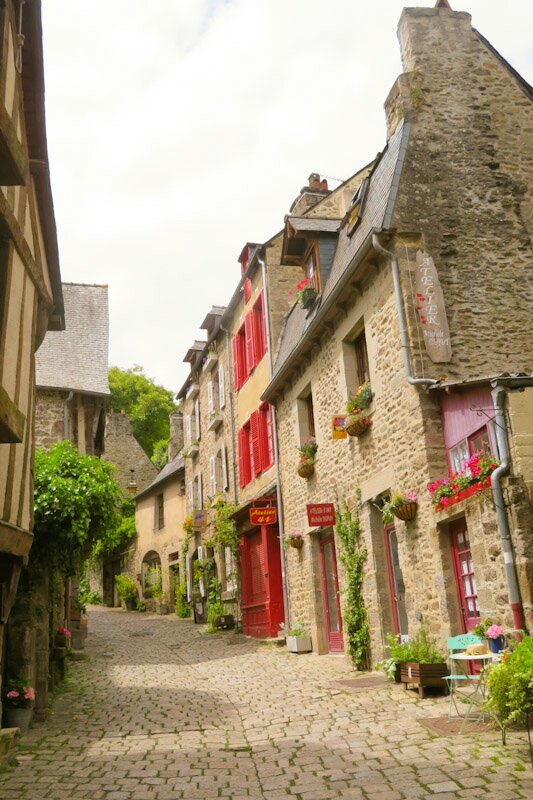 As we got back to Saint Lunaire the sun was out. Not a cloud in the sky. It didn’t bother us that we hadn’t had the sun today. You only rely on the sun if you’re going to sit around a pool or on the beach. We’d had a good day without it. The bay certainly looked good with the sun on it though. 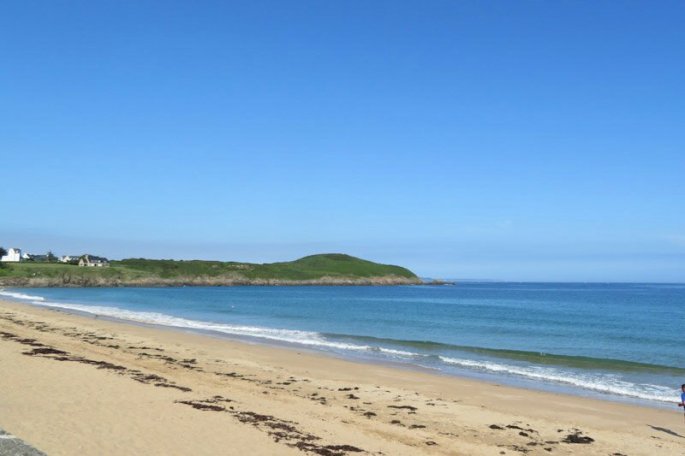 It was too nice to waste the sunshine so we sat around the pool for a bit and Kev and Si donned their best boxer shorts and went in the pool 😂. Apparently Kev said he’d got stopped on the way in as they thought he was smuggling a python in! 😲😂

We woke up to glorious sunshine the following day so me and Kev decided to walk from Saint Lunaire into Dinard. You can get the bus, just a short walk from the campsite, that takes 15 mins and only costs €2.70 but we wanted to get our steps in so took the coastal path. We had a 20 minute stop for a drink and to take in the views then plodded on. The scenery was beautiful. 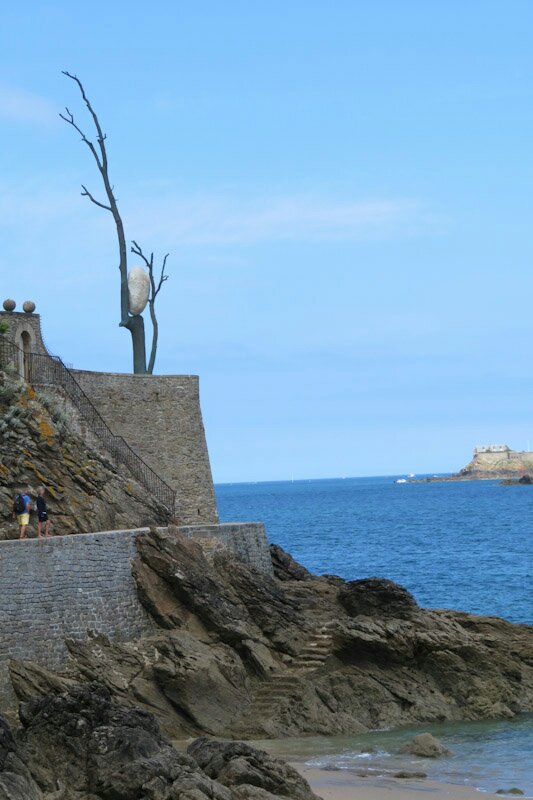 The photo above was a tree with a huge rock balancing on it. If it toppled on someone they wouldn’t survive!

It took us 3 hours to reach Dinard and we enjoyed every minute. We’ve been over indulging on fresh baguettes, pain au chocolat and croissants so need more exercise!

Dinard is a coastal village with numerous shops and restaurants and a clean beach with white sand. There are a couple of large supermarkets there where you can stock up too.

We called into the Intermarché supermarket to get some provisions for a bbq. Oh did we call in at the right time! They were just reducing all their fresh goods as it was Saturday and they’re only open half day Sunday. We got 4 steak burgers, 4 chicken breasts, 5 Mexican flavoured pork steaks and 5 Provencale flavoured, 4 small rump steaks, cheese, salad, Russian salad and burger buns all for €20.02. It lasted us 2 nights haha. Think we’ll go shopping more on saturday afternoons. I love a bargain 😉. The guy who worked in the supermarket said if we find anything with a date on up to two days in advance to let him know and he’d reduce it. We searched and searched but couldn’t find any beer or wine that was near it’s use by date 🤔😂.

Later that evening we sat and chatted outside whilst enjoying the cider of Brittany. Kev has been teaching our friends how to speak French so they can both now say “eeyore eeyore eeyore” 😂.

Michelle pretended to cook the food on the bbq. I cooked all the food, she turned the chicken over but she looks the part 😂 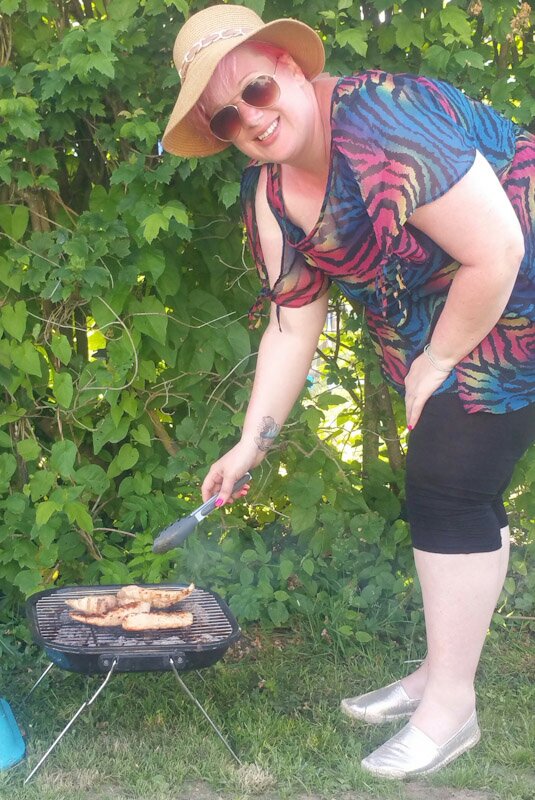 Where as what she really did was this…….😂😂. It dropped cool about 9pm so blankets were needed.

Sunday was a rather lazy day for us. We only did 14k steps. We walked to the large market in Saint Lunaire then came back to the motorhome but it was too hot to sit outside so we went to get the cool breeze off the sea whilst sitting on the beach.

We enjoyed another bbq that night but soon after we’d finished the clouds rolled in and the sky lit up with the forked lightening and loud rumbles of thunder.

We have one more night left on the camp then we move back up the coast to visit the beaches of Normandy. Si and Michelle head back to the UK and back to work 😄.

After indulging for 3 weeks on carbohydrates we’ve only put on 1/4lb each. Think all the walking has helped. 😊

We’ve had a great week visiting the local areas and enjoying each other’s company. If you want to know more about the campsite click HERE and it will take you to their website.

Please feel free to sign up to our blogs and to can receive them via email.

11 thoughts on “A week on a campsite in Brittany. Now this part of France has “wowed” us.”