We were sad to leave Ushuai as we knew we wouldn’t be seeing mountains for a while. Our 2 hour flight took us North to Trelew in the Chubut Province of Argentina.
The Welsh colonization in Chubut started in 1865. As a result of this process, Trelew began to develop. The name of the city stands for “the town of Luis”, as a tribute to Welsh pioneer Lewis Jones who founded Trelew and set up the Welsh colony in Patagonia. If you would like to read more on Lewis Jones and how he founded Trelew click here.

The history of how and why the Welsh decided to settle in Argentina can be found here.

They have a monument in the town square celebrating the colonisation. There are also reminders of the Welsh colony all across the town. One side of the monument is in Welsh. Really don’t have a clue what it says though.

When we arrived it was sunny and very warm. Woo hoo the sun lotion and shorts will be coming out again 😎.

We got a taxi to our private room in an airbnb, and we were both on a downer. The area was flat, non descript, small houses, no landscape at all….and we’d got 4 nights here 😣. 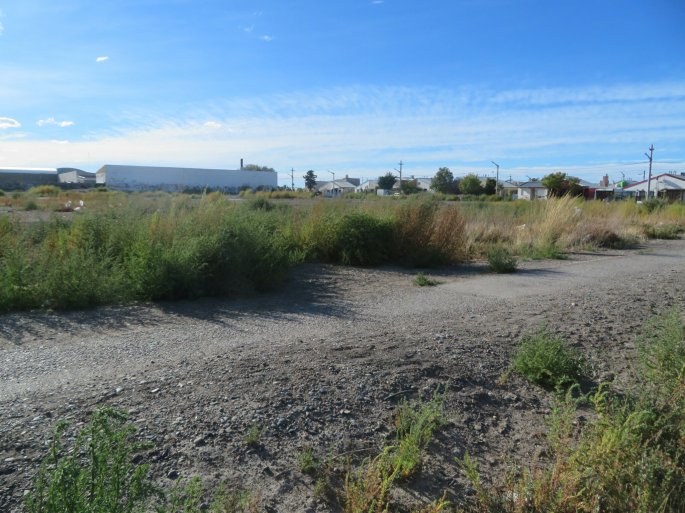 The house itself was lovely, and huge. We had our own bathroom and able to use anything in the house. All for £19 a night. A big difference to the south. We went to the supermarket to get supplies and 2 fresh corn on the cobs, tomatoes, carrots, an onion and 4 bananas came to less than a pound!! I’m sure we were under charged.

The following day, with the sun shining we set off into town (which was a 40 minute walk) and got the bus to Rawson. A mere half an hour on the bus brought us to a glistening sea front with a huge promenade. As we neared midway point I spotted something huge in the water. Dolphins….the biggest we’ve ever seen! We got off the bus and walked back. That’s a good thing about South American buses, you can get on or off whenever you want. See the video below 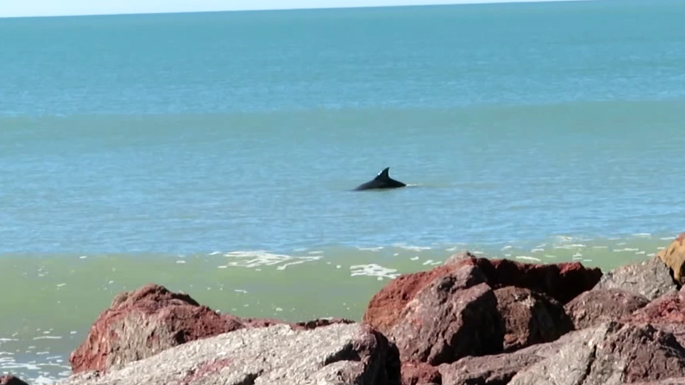 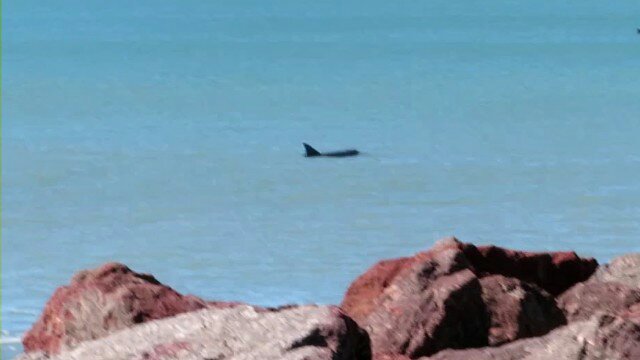 They were so big that at one point we thought they were whales!

We sat watching for about an hour. It was just nice soaking up the sun.

All of a sudden they disappeared. We never saw them again. We walked along the promenade, wanting to keep our steps up. I’d decided to wear my Keen sandals rather than walking shoes. They don’t have as much support in them though so after a while I started to slow down. Kev hates walking slow and I saw him looking down on the pavement. “What are you looking at?” I said. “The snail that’s just overtaken us!” He said 😂 🐌. Sarcastic git.

There was some gorgeous houses on the seafront.

I’d checked the weather forecast before we came out and told Kev it was going to get to 24 degrees so to wear shorts and put sun lotion on. Did he pay any attention? Sort of. He wore trousers that zipped off but didn’t out sun lotion on. As it got hotter I kept telling him to zip his shorts off. Being stubborn he wouldn’t. ..at first. He compromised. He got some strange looks from passers by. He did eventually zip the other leg off. 😉

I called in at the Tourist Information office. Did they speak English? No! 😂 it’s a good job I can get by with my Spanish. She told us of some seals that were near the harbour….we’d look at them later. The only tourists they must get here are other Argentinian ones. We are still being stared at all the time. Maybe because we BOTH have blonde hair. 👱

There was only a few seals on the beach but still nice to see. 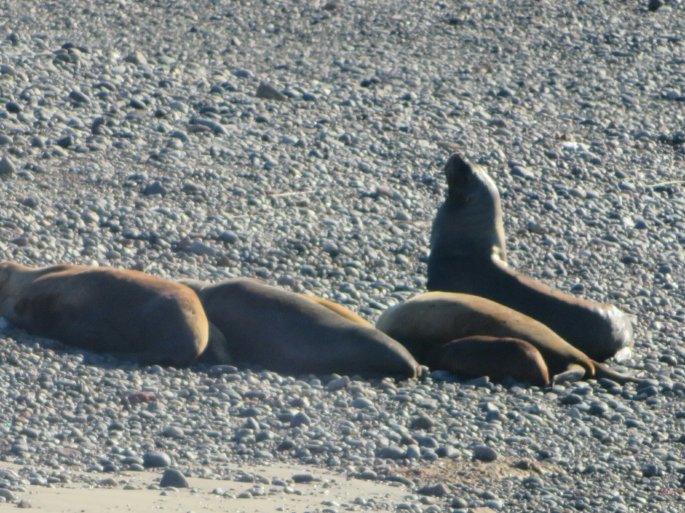 We went to get the bus back. I was walking to the bus stop when Kev said it was the wrong bus stop. I was on the wrong side of the road! We stood for half an hour and nothing came. There were only buses stopping at the bus stop where I was originally going to go to. Feeling confused I went to ask someone where we get the bus back to Trelew. “Here” he said. So we’d just watched our bus drive passed us on the opposite side of the road, going the wrong way. 😯. Apparently it goes a different way home. Oh well we only had an hour to wait for the next one! 😕

We had a day exploring Trelew the following day. It doesn’t really have much to offer to be honest. The most interesting thing is the Hotel Touring Club, that hid Butch Cassidy when he was on the run from the Pinkerton Detective Agency. They have his room set up as a shrine that you can visit for free.

There was a large pond that has some pink flamingos and other birds in. It wasn’t very picturesque though. There was rubbish around the edges. 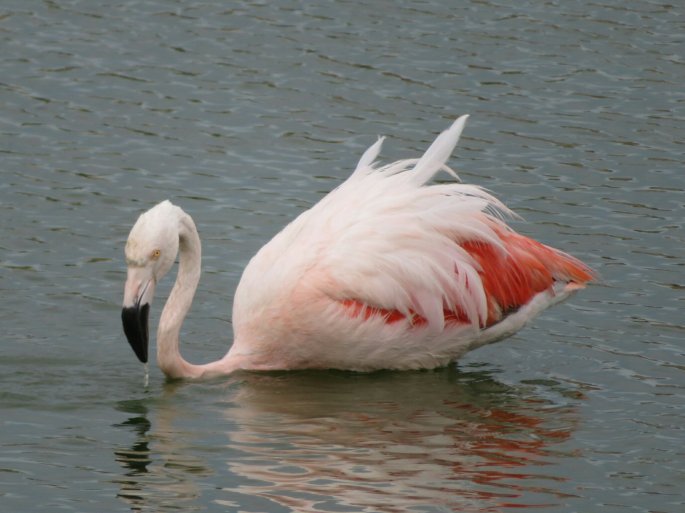 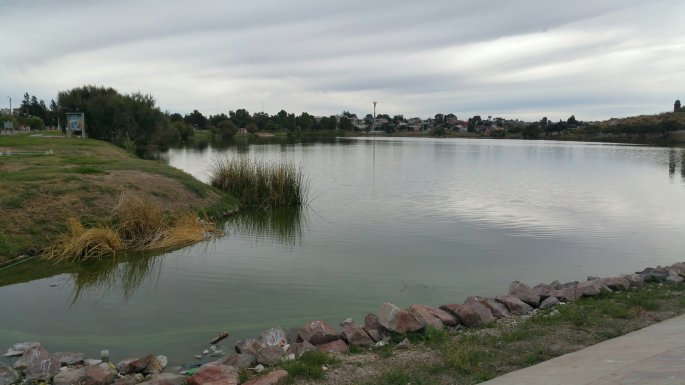 The streets around the town need sorting out. The cars must be ruined underneath as they’re all pebbles on the roads.

We didn’t want to do much today so went for our hair cutting.

We took the local bus, the following day to two little villages. Gaiman was a little green haven surrounded by desert. It wasn’t really the desert but it was as good as.

There was a lot of Welsh influence here. They had tea houses serving traditional dense fruit cake. We’d seen a sign for one and decided it would be rude not to try the cake so we followed the sign. (Gales is “Wales” in Spanish)

We walked and walked following the signs down a dirt track for about 2 miles. We passed a small Welsh guest house, and in true proud Welsh tradition, they had the Welsh flag outside, alongside the Argentina one.

There were cars with the stickers on their bumpers, obviously of Welsh heritage.

When we got to the end of the dirt track we finally arrived at the “Tea House” at 12.30pm. It was very grand with beautifully kept gardens……and it was closed! All the shops close around 1pm for a siesta. We were aware of that but this didn’t even open until 2pm. Gutted. Even the gates were locked so the photo below is all over managed to get. 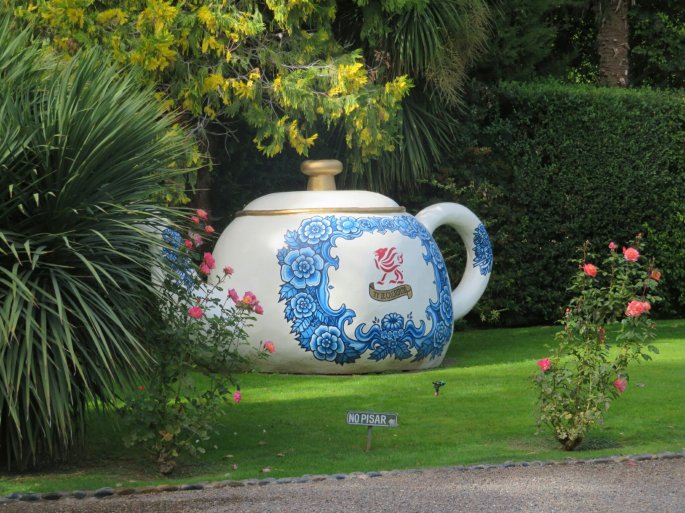 We had to turn round and head back into town getting bitten by bloody insects all the way back! 😣

Now because we are somewhere that has a very visible Welsh influence, Welsh Kev came out again. 😂 As you’ll all be aware now, he’s not very good with languages or accents so when I say he spoke Welsh……🤔

Below are photos of a Welsh/Argentina school and and little cafe. 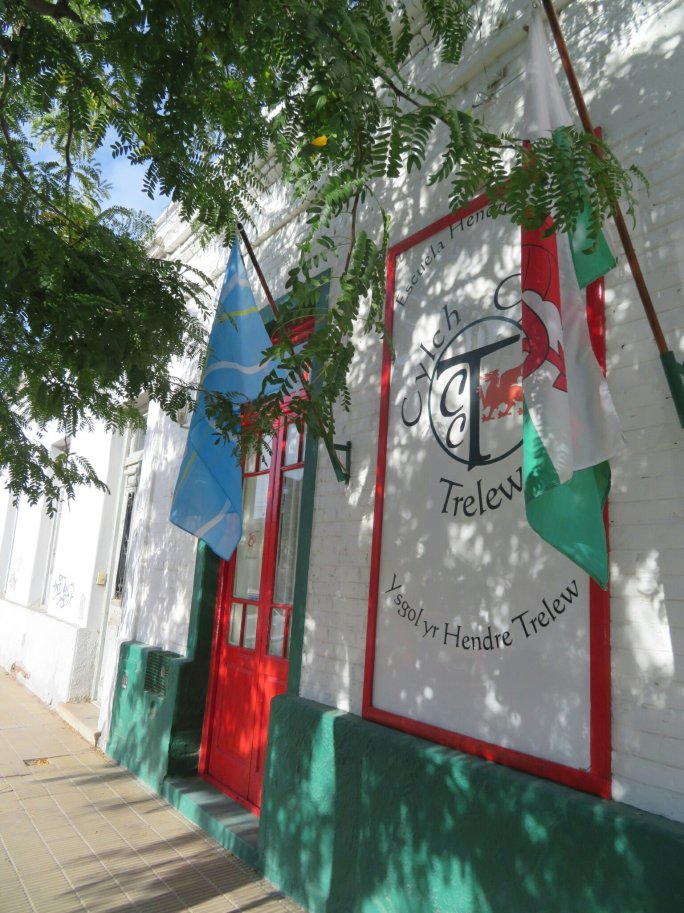 From here we took the bus to Dolavon. It didn’t have a right lot to offer either but I had an interesting chat with the girl in the Tourist Information office. She said her great, great grandmother was Welsh and had to be taught Spanish when she went to school. When people from Wales came over to visit, years after they’d settled, she couldn’t converse with them as the language had changed. There was an old railway station, some of the old houses were still there too, and roads with Welsh names and mixtures of Welsh/Spanish names. 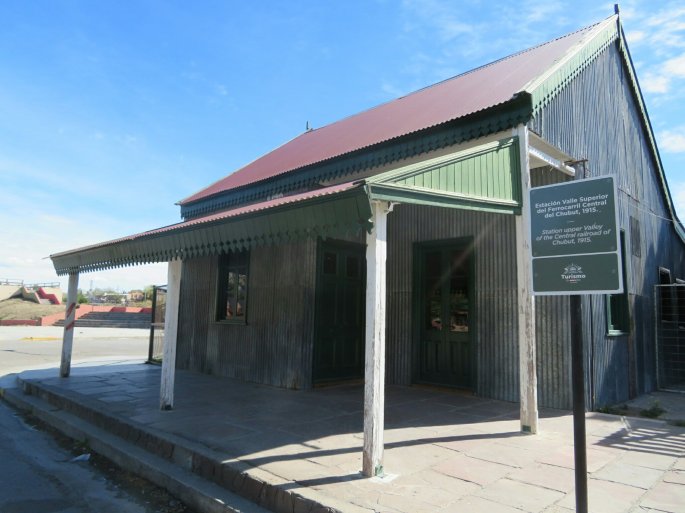 There was a big building on the corner of one street that had the name ‘Isobel’ above it. 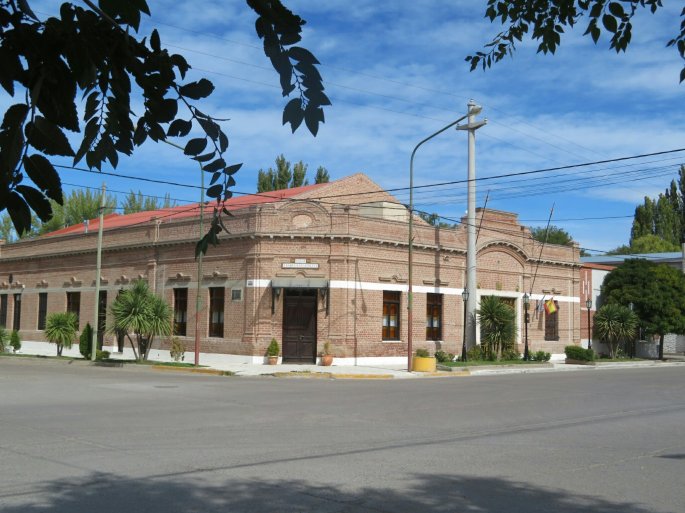 According to my local guide (coloquial Kev) Isobel was blind and had a wobbly foot. She was known locally as ‘Wobbly Isobel”.?! 🤔😂

Tomorrow we’re off to chill out in Puerto Madryn (originally named Porth Madryn, by Lewis Jones).