The train to Torun was horrendous. We’d previously been taking the inter city trains but this one was a local one. It looked like something from the 1960’s! It was absolutely freezing and packed to the rafters. Standing room only. The toilets on the train didn’t have any water to flush them or wash your hands. You pressed your foot on a pedal and the bottom of the toilet opened up and shot everything out onto the train tracks!  😲

At this point now, I’ve had enough, I just want to go home and see the family. As nice as Poland is you can get sick of seeing city after city.

Our airbnb apartment was lovely. Close to town and the train station. For £30 a night you really can’t go wrong.

We walked into town, and thankfully this was different.  It was the only city that hadn’t been bombed in the war so all the buildings  were authentic. No painted houses surrounding the square.

It seems in every city we have been in there are donut shops. They are so cheap and the locals queue outside the shops for them! They do look amazing though. Kev decided to add another thing to our bucket list. To see how many could be eaten before we are sick 😂

We went for a drink in a bistro on the square. After doing 5 weeks in different cities we needed to plan to go somewhere with scenery. Kev had a beer whilst I had a Desperados, and we decided we want to see Chile, Patagonia and more of South America.

4 beers, a Jim Bean and an Ameretto we decided to order food. We both had a lovely meal and was dreading the bill. We don’t normally do posh. We walked past somewhere the other day and Kev said “That’s not our type of place Tina, they have table cloths on the table!” Haha.  Are we really that much a pair or cheapskates? Yeah probably. We save money as we travel far and for a long time,  so can’t afford to splash out on expensive meals.

After having Pork loin in mushroom sauce with roasted root veg and herby mashed potatoes, and Kev had chicken wrapped in Parma ham and all the alcohol we were surprised the bill only came to £26.74! Poland is very cheap and the portions are huge. They really are food orientated, which is not good for people like me who love food and also a bargain…..dangerous combination when trying to lose weight……yeah right.

We wandered back home through the town,  a little tipsy after not having drunk for a while. I knew the alcohol was talking when Kev called me “a reet bobby dazzler” and he thinks I’m “smashing” 😊 nice to hear nice words sometimes, even if they were said in his Barnsley Bob accent. 😆

We seem to have seen everything Torun had to offer. We’d walked around the town, been to the Gingerbread museum and walked along the side of the river. The sun made an appearance which was lovely but as soon as you were out of the sun it was freezing.  It’s definitely a lot colder here.

We move on to Gdansk tomorrow. Poland is lovely and the cities are great but seeing them all at once makes them very much the same.

Well what can I say? Gdansk is the jewel in the crown. Our little airbnb was out in the sticks in a quaint local neighbourhood by a river.

The Old Town had more character to it then other towns and appealed more because of the water surrounding it. 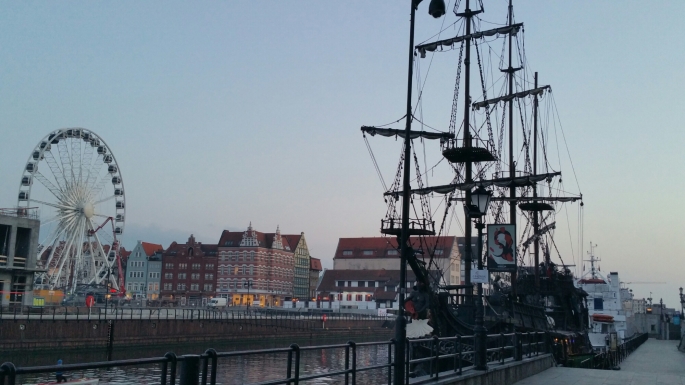 It’s so nice to see some greenery. The walk to the city is only 20 mins away and you have to walk over the river and adjacent to some fields. It wouldn’t take as long if you could cut over the grass but it’s just not worth it. Poland is the only country I have been to that it’s streets are covered in dog poo!! Not many pick it up, it’s disgusting. Anyway back to more pleasant things 😁

We wandered through the town and my thirst for taking photos returned. Gdansk is like a breath of fresh air. It’s so different from the other cities and there is more in the surrounding areas to visit. 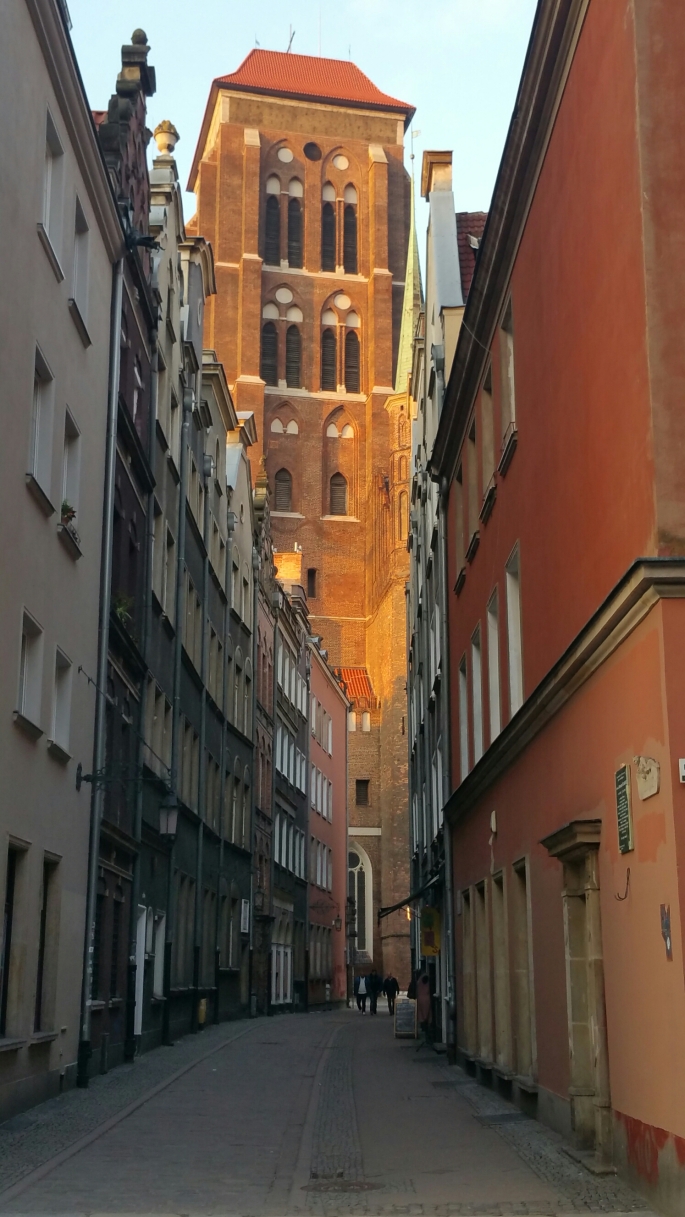 The street below was full of stalls selling jewellery. They all sold the same style with amber stones in…none had anything different from the rest. How they make a living I don’t know. Nice street though.

We had a dinner in the old town and headed back.

The following day we woke up to the sun shining through the window. The grass was covered in frost but was quickly starting to melt. Change of plan for today. Three people had today us to go to Sopot, which is a beach location 15 mins from Gdansk.  As it had the promise of a nice day we decided to try it. An 80p train ride took us here 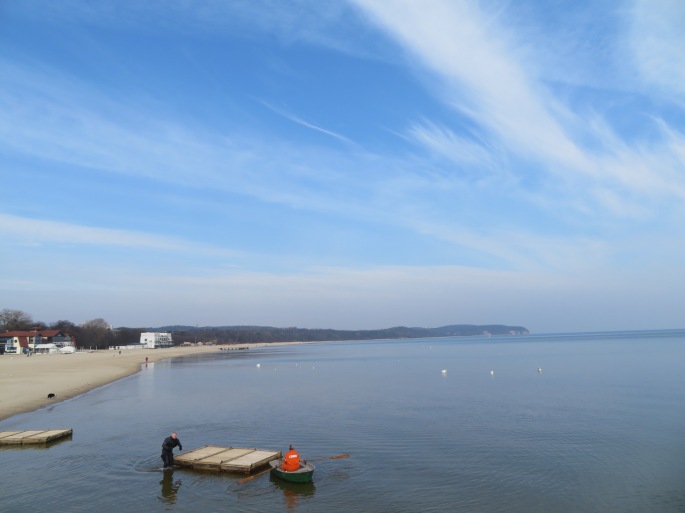 Sopot is a popular summer destination in Poland.  There weren’t many people there but the place was a great change of scenery. White sands, blue sea and a lovely boardwalk.

We called in for hot chocolate and cakes then walked back to the station. 3 hours had flown by and had been a nice change from being in the city. Even the streets looked different. Costa Coffee was a strange shaped building but I love the quirkiness.

We got a ticket for the train back into Gdansk  but decided to get off after 2 stops as we saw a shopping mall.
Nothing to offer in the shops so we headed back to the train station. We only  needed to go 3 stops…do we buy another train ticket or try risk it without?  We got on and sat down quickly on the Inter city train. We thought if we looked comfortable then the ticket inspector would think we’d been on ages and not ask to see our tickets! haha. We practised looking like we were asleep with our heads back and mouth wide open but  couldn’t stop laughing. We were like a pair of naughty school kids.  If we’re asleep then surely they wouldn’t wake us up? omg what are we like? We were only saving £1.60 and risking getting fined. 😂

We got to our stop and headed to the doors. Phew  the inspector never got to us. I pushed the button to open the train door and Kev started pushing me in my back, saying “Quick get off he’s coming!!” We legged it off the train and into the station laughing to ourselves. I think we’re getting worse as we get older. 😉

We stopped off in a local burger place to have lunch. A  humongous burger and fries for £6 😲 Poland is so cheap. 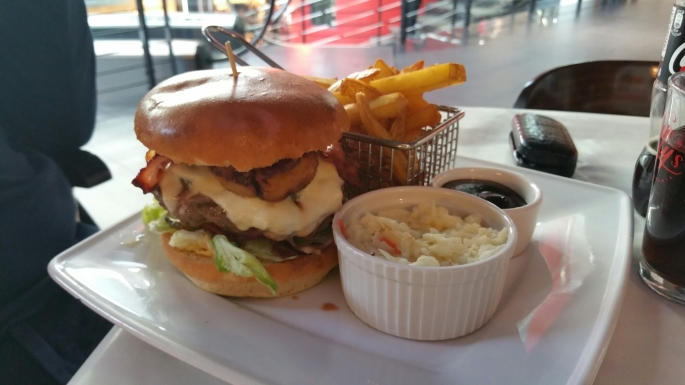 We couldn’t eat it all, but tried our best. Hahah. We headed back to the old town with our bellies full and in good spirits. Today had been a good day with a visit to the seaside. 🌞

Kev started to sing….again his own silly songs. To the tune of “prego,  prego anyway you may go”🎵  We had “rooti tooti anyway you mooti”……oh my days.😕

We passed an underwear shop with window models wearing sexy black lace lingerie. He lovingly put his arm around my waist and said (in his Barnsley Bob accent) “Get thee fat arse in there an see if thee can find owt to cover it!” He winked at me and kissed my cheek. I couldn’t keep a straight face 😂

We took a walk along the water front admiring the boats and the clouds. It was a stunning view and good place to rest for a while.

Time to head back to our apartment.  We were tired and we’d walked 11 miles today.  😮 In the daylight you could see the buildings in the locals area that had survived the war. They  were still standing derelict.

The sun was starting to go down as we crossed the bridge. The swans and ducks were on the lake…lovely sight.

Our 5 weeks of travelling around Europe is now over and we’re heading “home” tomorrow. We don’t actually have a home to go to! haha. We’re staying with a friend until we pick our motorhome up next week. First though I’ve got my daughter’s hen weekend to attend….bring it on 🍹🎉🍸🎵