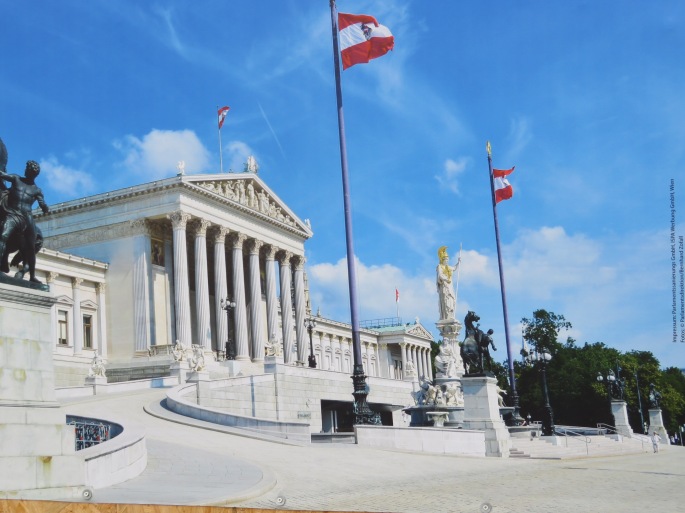 CLICK  ON THE LINK BELOW TO READ THE FULL BLOG

After leaving the heavy snow and freezing temperatures of Lithuania and Latvia it was a bit of a shock landing in Vienna to a balmy 13 degrees at 6.30pm.

The airbnb that we were staying in was in a district called Renwegg and was in a busy suburb with plenty of shops and eating places around us. We stayed with a local couple and just rented a room from them. This way you get to see local neighbourhoods and you don’t pay tourist prices for food and drink.

Vienna was nothing like what I expected. I thought it would be a little town nestled near some snow capped mountains! haha. How wrong could I be. It was a sprawling metropolis of the most ornate and opulent buildings I’ve ever seen. I always thought Brussels was a good place for architecture but this knocks it socks off.

You literally have to keep stopping and looking around you to make sure you haven’t missed a beautiful church  or building tucked away down one of the many streets. 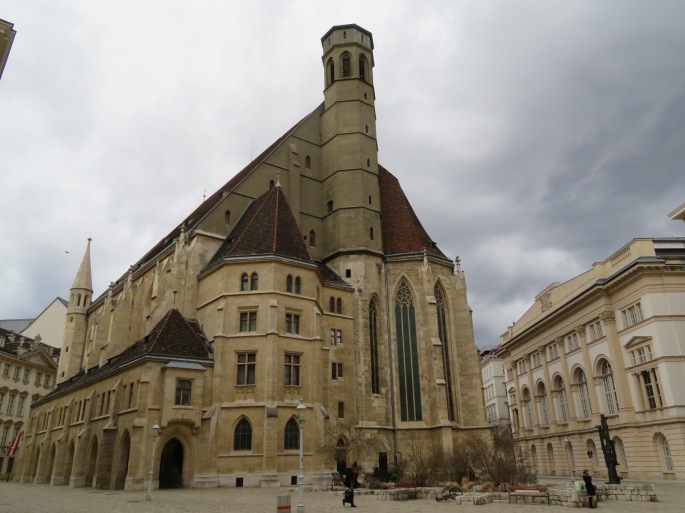 On top of most of the buildings there are carved statues and around the doors there are sculptures. We were in awe of the work that has been done to create so many magnificent structures. 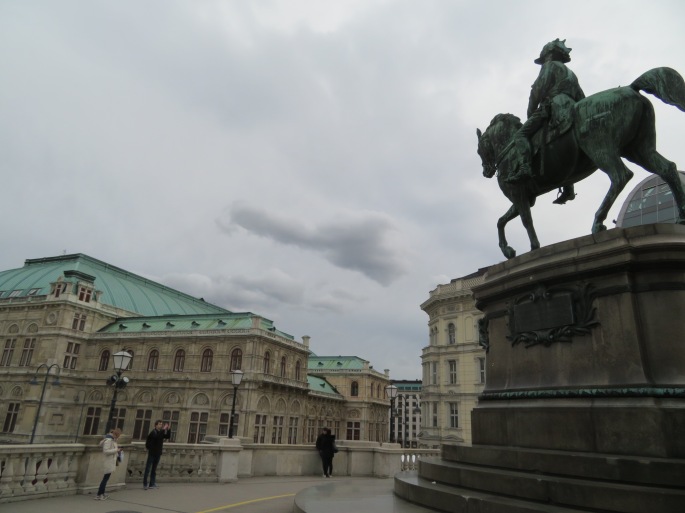 We love walking so we explored the city on foot. We did 18 miles one day and 15 the following day! 😮 We would always find a bench in a scenic spot to sit down for a while and have a look at the map to see where we were. We found a bench outside this building. 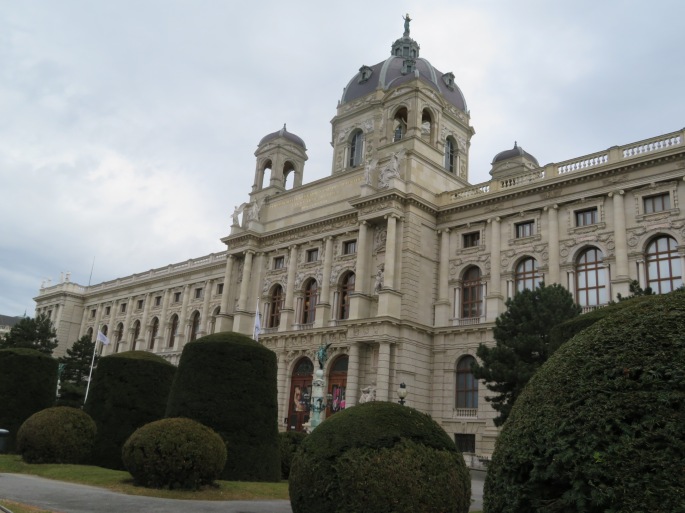 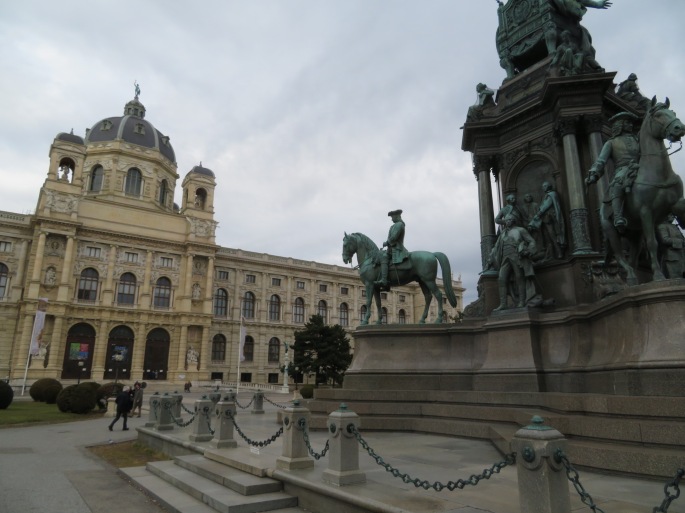 Kev opened the map up and turned and said to me…”What have I told you about modelling? “. I didn’t have a clue what he was talking about until he showed  me the photo inside the map…he’s a cheeky sod!

We were told we should go to the opera whilst we were here or see a ballet performance. Although we do like to try local things and experience the local culture, we wont do things we don’t like just to “tick it off a list”. Instead we tried the local schnitzel…We enjoyed that much better than we would have done the opera. haha.

We were discussing food and I asked Kev what his all time favourite breakfast would be. His response made me laugh “fruit, granola, yogurt, ham and different types of cheese”….yeah right! So I asked him if given the choice of American pancakes and maple syrup (his favourite) vs the above  which would he choose…he said “I’d choose the European breakfast…..they don’t call me European Kev for nothing” I don’t know where all this drivel comes from.

We visited the famous Spanish horse riding school…wow,  what a place. The horses had their own member of staff, dressed in uniform, to groom and feed them. It was quite impressive. They do a performance to operatic music on horseback but we couldn’t get tickets for it. 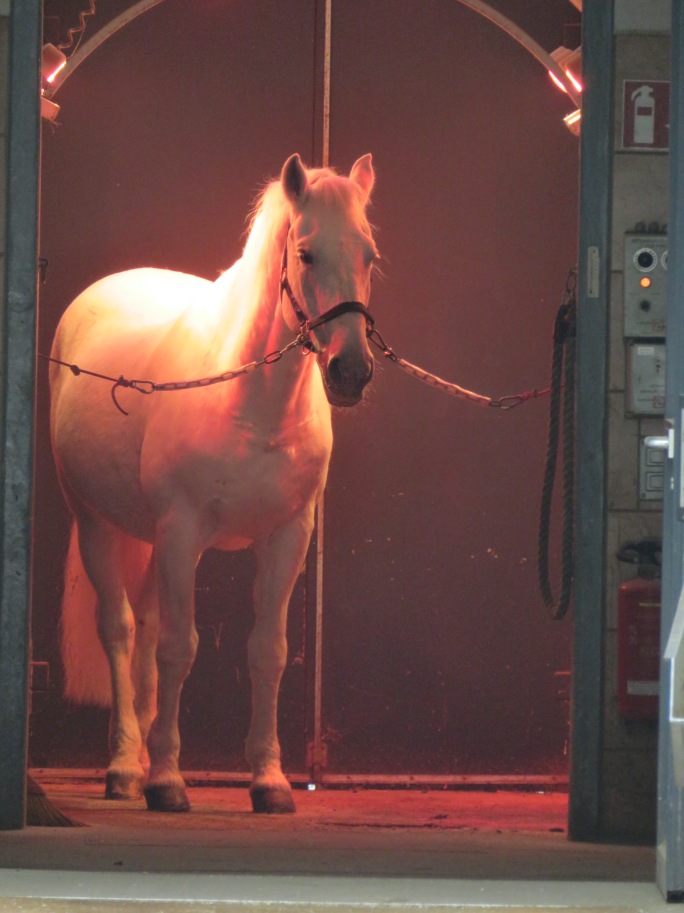 Everything about this place is very upmarket . ..even the cake shop were selling posh cake pops

We walked around round the local fairground, which was mainly closed, apart from a few rides. It was very old fashioned but seemed to belong in the city..It had Mozart symphonies playing over the speakers as we were walking around. The old fashioned ferris wheel was slowly rotating showing a few tourists the heady sites of the city. 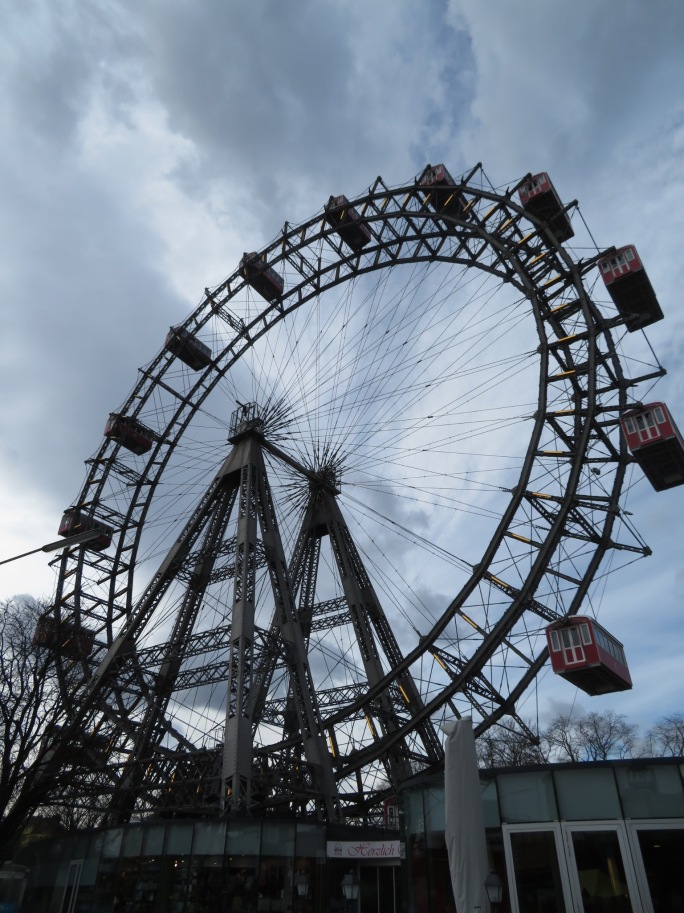 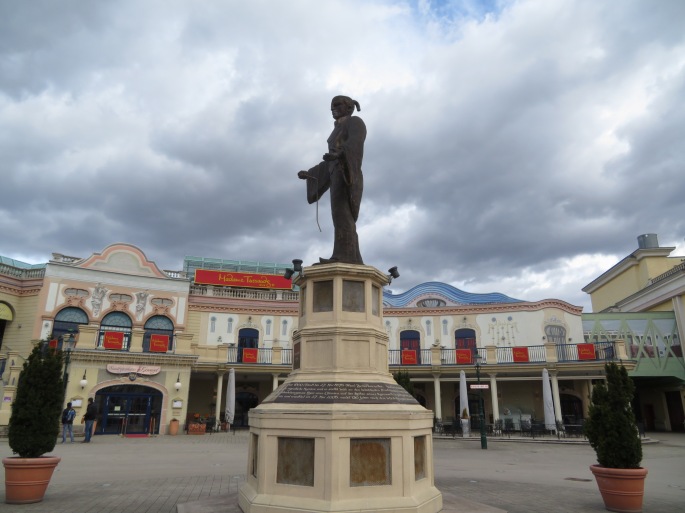 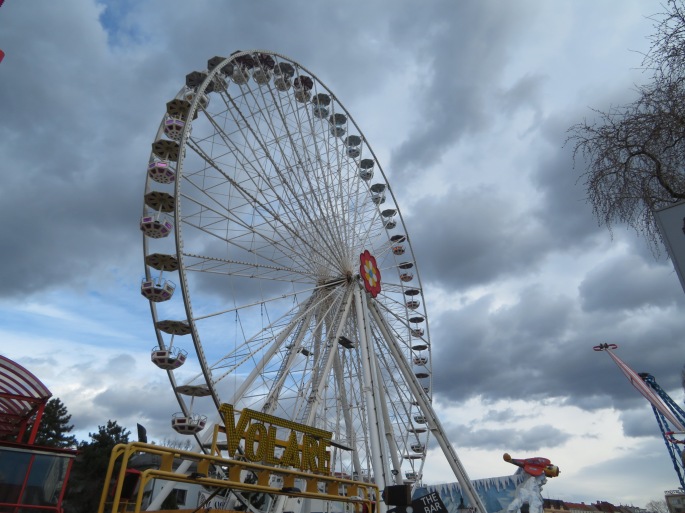 The clouds in the sky were amazing! We stopped to take the photo below when we were walking back to our apartment. 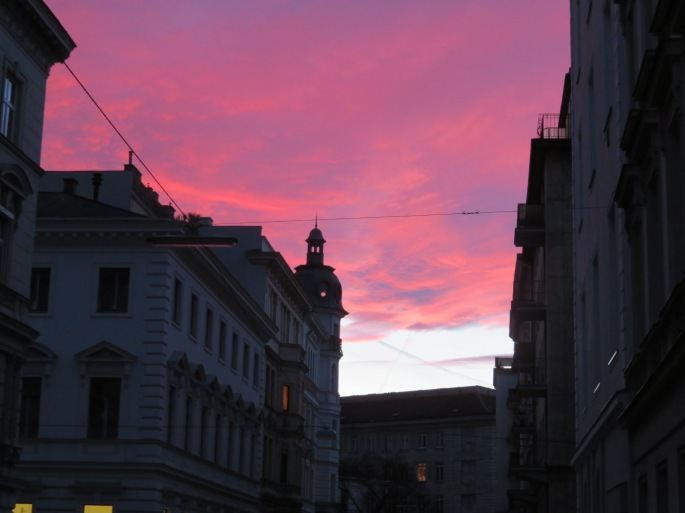 When Kev visited Argentina last year on his own (for football obviously) he met 2 Austrian guys and they kept in touch via Facebook. As they’d noticed he was in their  home town they asked to meet up with him. Hmm the chance to meet up with 2 other football fanatics in a bar where they were showing a football game on tv….didn’t appeal to me at all. I agreed to go and met Borti, Chris  and Harry in a real ale pub in the centre of Vienna. On walking in I was shocked to see that people were smoking inside. I’m not used to it now with  all UK pubs being non smoking. It seems Austria,  along with a lot of other European countries haven’t adopted this idea yet.

Borti, Chris and Harry were great guys. They kept me and Kev entertained all night regaling us with a hilarious account of their football trips. They are quite fortunate (or unfortunate however you see it) to work in the media. Borti is a sports writer (football) for a huge newspaper, Chris does the same but as an online football reporter and Harry works in the film industry. They made us both feel welcome and we have agreed to meet up if Leeds United get to Wembley….bet I’ll never see them again! 😂😂. Kev and the guys are arranging some time away in September to watch football in Poland. I will be arranging a girlie holiday away 😉

We walked home as we’d missed the last train and I was ready for my bed.. we’d walked 18 miles that day 😲

The following day we continued to explore the city and wasn’t disappointed with what we saw.

It has a bustling shopping centre filled with locals and tourists. It’s a great place to sit and people watch and has a huge church in the middle of the shops, of which the interior is very opulent. You can see the money goes to the churches 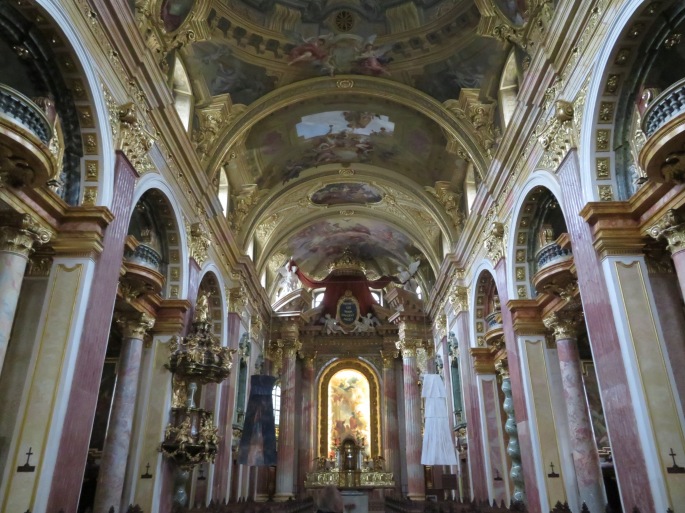 We had been walking around for a while and we were shattered. My head started to spin and I thought I was going to fall over. I grabbed on to Kev’s arm and told  him I felt like I was going to fall. He didn’t even ask if I was ok. I said “You don’t care do you?, you didn’t even ask if I was ok” “Of course I care. Was it your knees that felt like they were going to buckle under all that weight?” I smacked him on his arm and said “No it was my head” “Can’t be your head, it’s not heavy enough to make you fall. There’s nothing in there except your little peanut brain rolling around!” He retorted.  Then, just to add more insult he added  “I was just wondering how I was going to pick you up if you fell, but I’ve spotted a crane around the corner..I’ll ask the crane driver to winch you up” how I put up with him I don’t  know,  but he does make me laugh 😁

I was getting fed up of walking so we decided to head back to the apartment to cook something for dinner. We decided to go see the building where the parliament  convene. This was stunning, both inside and out

Adjacent to this was a huge cathedral with a temporary ice skating rink in front of it, and another ferris wheel. I  have never seen a rink so huge! They were only charging €7 for the day for entry onto the rink and €7.50 skate hire.

We decided to get the tube back as we were quite far away. I paid for the fare on my card but the machine never printed our tickets. There was no one at the station to ask for help so I checked my travel card balance online to see if I had proof of purchase in case we were stopped. Yep the €4.40 had been deducted. We got on board and was gutted to get off at our stop and not to have had our tickets checked. “What a waste of money that was” I said. I decided to double check the money had been deducted but then realised that the deduction I’d seen on my card was from the previous night’s fare! haha we’d got a free ride anyway…oooops

We saw a lot of the locals using a child’s scooter to get around on. People older than me riding round the streets on a push scooter. Some of the younger ones had electric ones. Nice to see people getting some form of exercise 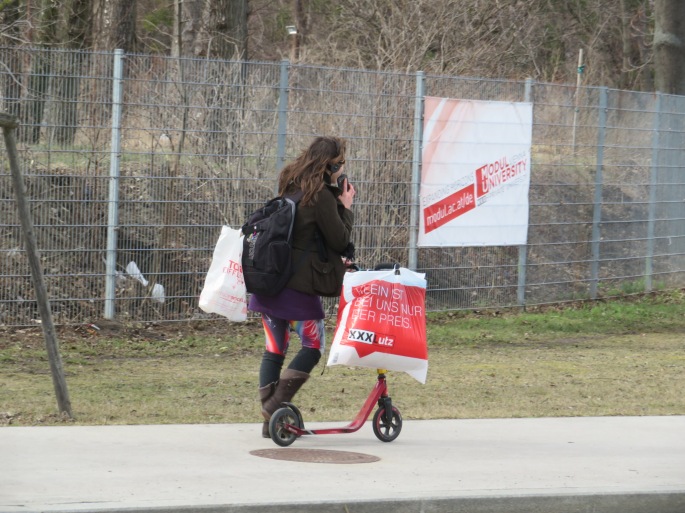 The couple we are staying with are vegan so they didn’t want us bringing any fish ir meat inside. We called at the supermarket to get some provisions for dinner. Fresh gnocci, mushrooms and some mixed olive ragu sauce made us a hearty dinner for two and cost us €2…bargain 😊

Vienna you’ve been amazing. Would I recommend visiting it? Yes. Would I come again? Most definitely

Tomorrow we get the train to Bratislava in Slovakia.

3 thoughts on “This means nothing to me……Ahh Vienna ♫♬”