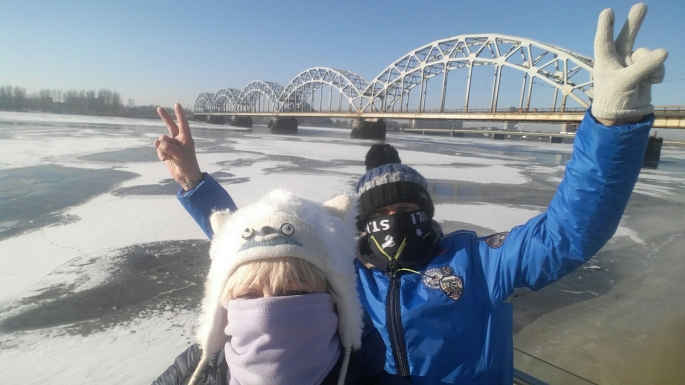 A 2 hour 40 minute flight took us to the beautiful city of Riga. It’s never been on my radar but we fancied somewhere cold for our first jaunt after selling the house. Safe to say Riga didn’t disappoint.

We arrived to a numbingly cold -10! The river was frozen over and lined with trees that were adorned with twinkling lights. The ground was covered in frozen snow…perfect 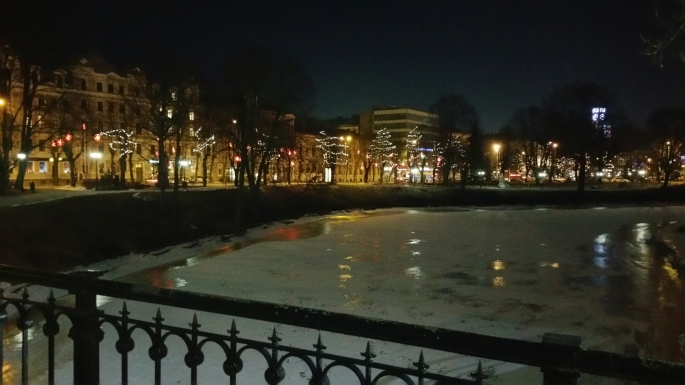 We had a walk around to check out the local area but it was far too cold so set off back to our hostel. The following morning we set off to explore the old town. We went into the local market and purchased goats cheese, black bread and garlic sausage. That was breakfast sorted. I needed a knife to spread the cheese so “borrowed” a plastic one from a cafe counter. We found a bench outside in the sun,  the seat had ice on it. ❄😨 I prepared our breakfast and we sat and watched the locals setting up their stalls in the central market. It was far too cold to sit for too long so we went to the bus station to buy tickets for our journey the following day.

As you walk through the city you can’t help but notice the buildings. They are very quaint and you feel like you’ve stepped back in time to another era. The architecture is very ornate, the streets are cobbled, and there are magnificent spires from the various churches reaching up to the blue sky. 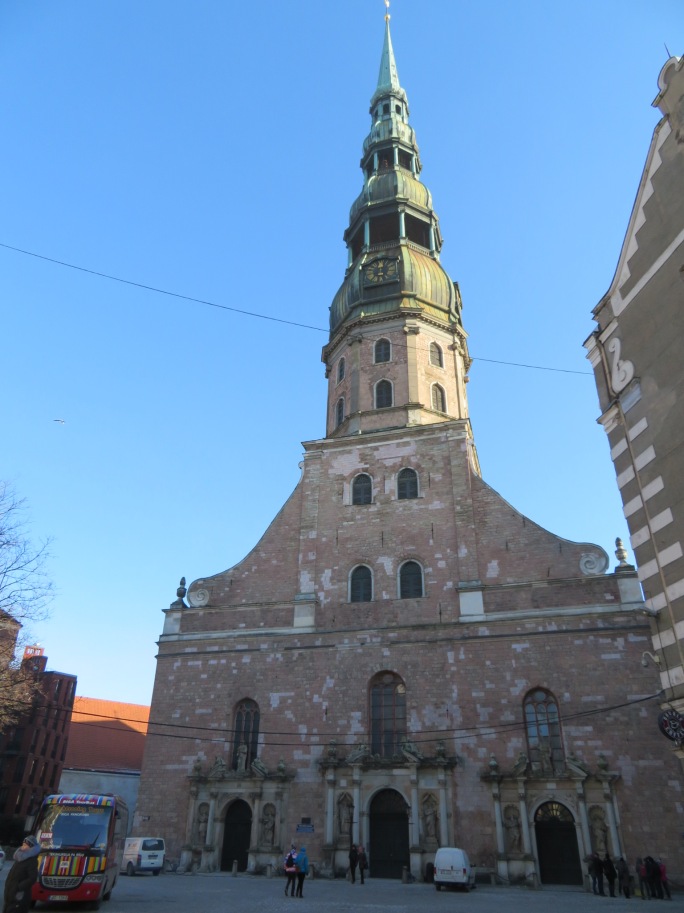 We walked around the rabbit warren style streets admiring the buildings and checking out the local cuisine. We were dressed for the occasion in our thermals, mid layer, top layer and down jackets, along with neck warmers, hats and gloves! Bloody hell it was cold 😮 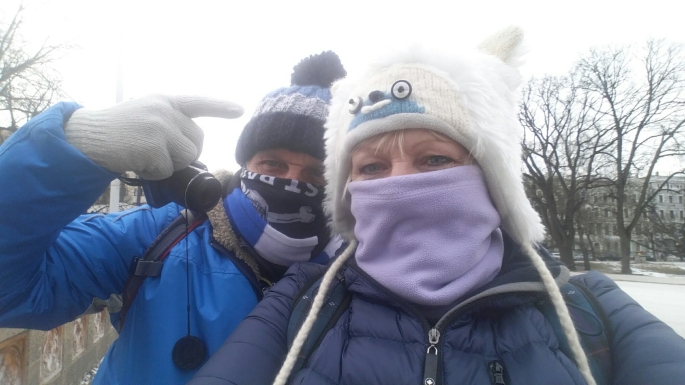 We came across a park that looked very similar to Central Park in New York. Very picturesque with the mounds of snow all around and the little bridge that was weighed down with all the padlocks from couples declaring their undying love. 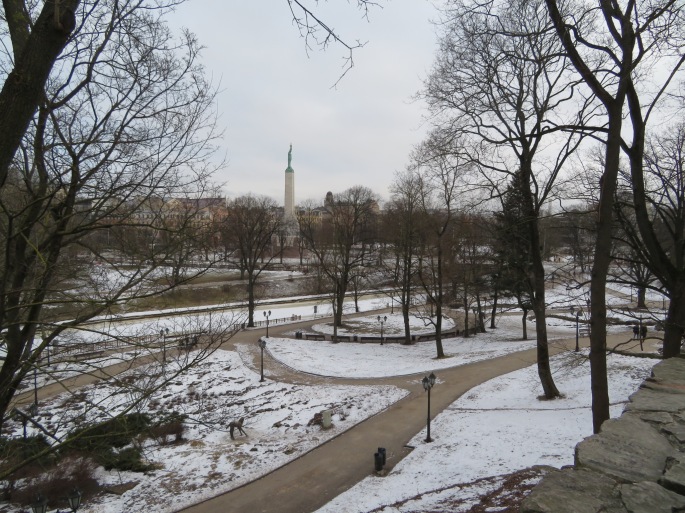 I was just looking and taking a photo when Kev (my hubby, for those of you new to my blog) turned around and said “don’t even think of getting one and putting it on  there with mine and your name on” ……”pfft you’ve got ideas above your station” I replied “I wouldn’t waste my money “. We both chuckled and walked off hand in hand.  Who said romance is dead?

We headed off to the river bank to see the huge bridge stretching over the icy water. It’s lit up neon blue on an evening but through the day it stands proud in metallic grey,  carrying the commuters from one side to the other.

We checked out the local Latvian restaurants and found one we fancied trying for lunch. It was down some stone stairs to an underground vault which served local beers, had Latvian folk music playing and served up a warming and filling fayre. My choice of food was celery and bacon soup with black bread then black lentils with smoked bacon in an onion cream sauce inside a thick slab of baked crusty rye bread. It doesn’t look very appetising but ….wow! So tasty and only €5 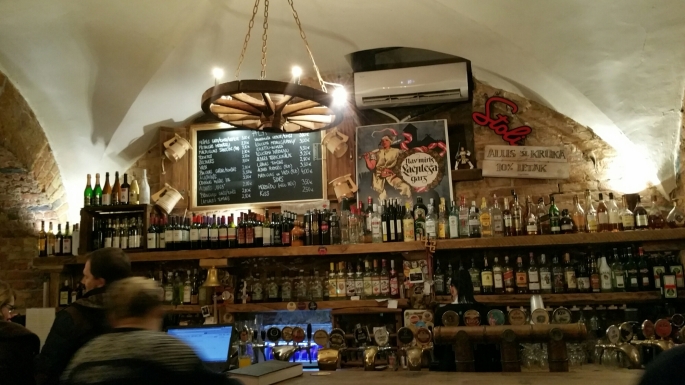 We were stuffed after eating this. It cost us the equivalent of £20 for 2 courses and a drink each. Bargain…just what us Yorkshire folk like haha. Feeling tired and our bellies full, we needed to walk!

We set off back into the city looking at the stalls with homemade thick pure wool socks, coats made from real fur, and hats of various styles all with the obligatory fur pom pom.

The sun started to set around 5.30pm and it was giving an orange glow in the sky. We headed off to capture a photo as it was going down behind some buildings at the other side of the river. 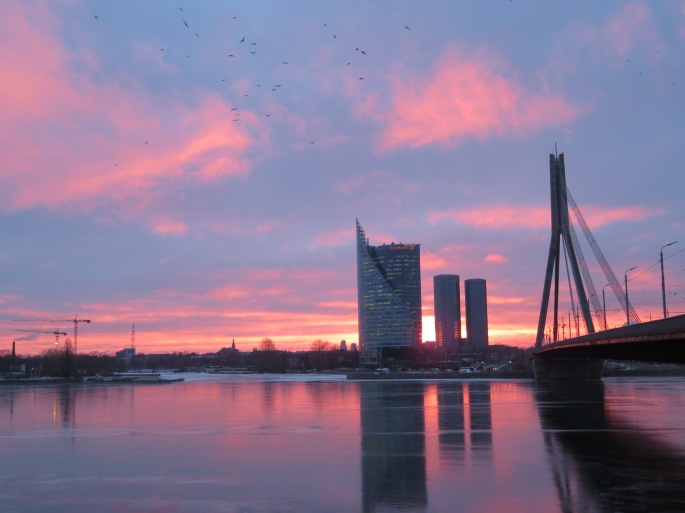 The sky looked like it was on fire…the temperature said otherwise. It was starting to warm up today, it actually got to -2. We even took our gloves off…quite balmy 😂 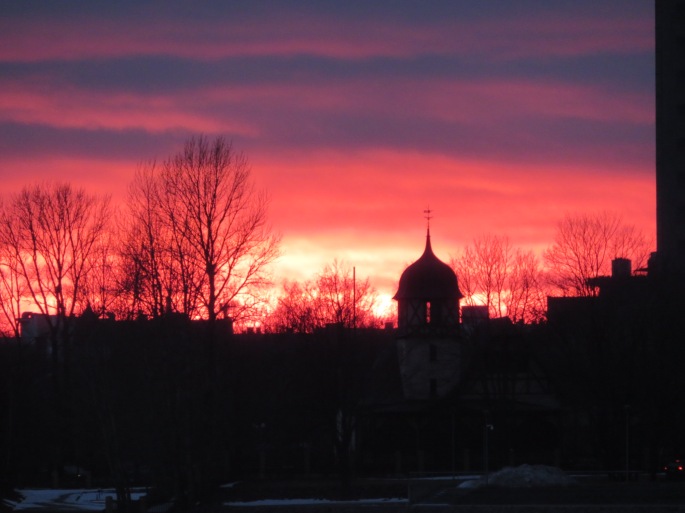 With my arthritic knees feeling the pain from walking all day we headed back to the bus station near our hostel and had dumplings with sour cream and flat leaf parsley for tea…a local speciality and very tasty.

We’ve got weetabix from the supermarket for breakfasts and some fruit. Should see us through for a few days. That’s the difference between travelling and going on holiday. We have a tight budget whilst travelling, especially when we’re away for over a month. 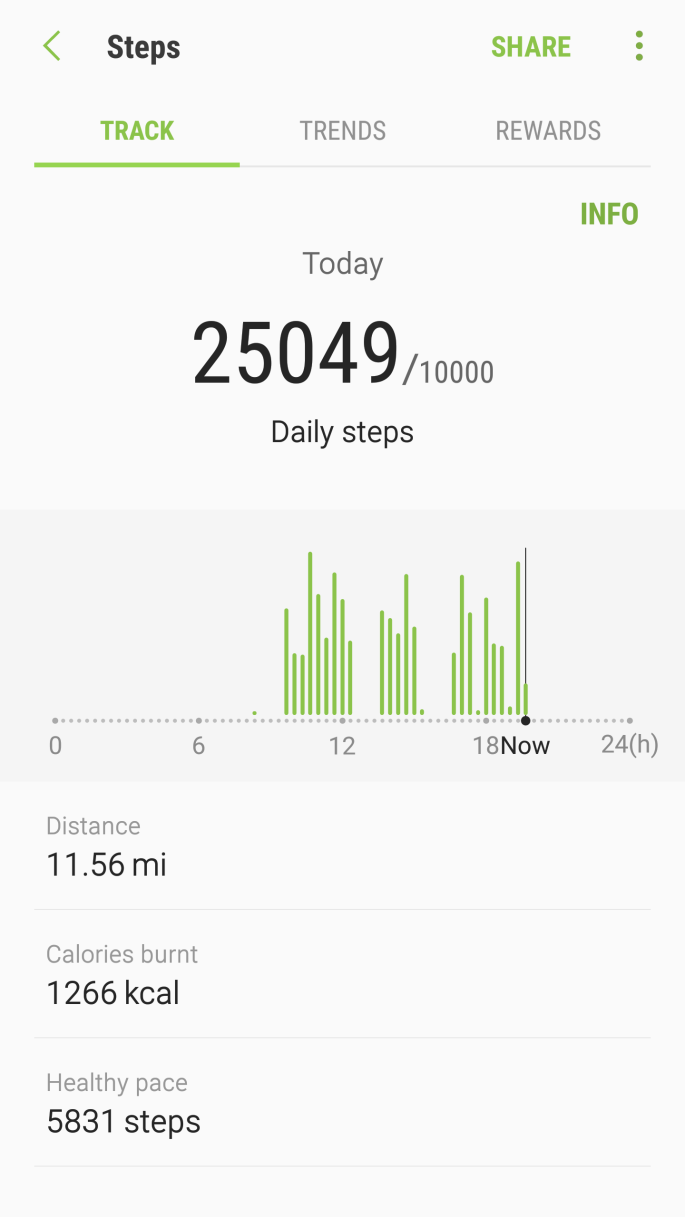 On day 3 we took the bus to Cesis. As we got further from the city you could see the trees turning from green to white. The air was icy cold.

On the way we  passed many lakes that had frozen over and the locals were sat on chairs, fishing  through a hole they had made in the ice.

Cesis had very old run down building and churches but this added to its beauty. The ground was thick with snow from a previous downfall.

We headed to the castle and to view the lake. Surprise surprise it was frozen over! My idiot of a husband decided to walk on it “just to see how thick it was” ….not as thick as him! I made him leave his bag and wallet before stepping on the ice….I needed money to get the train back to Riga… always thinking ahead 😂😉 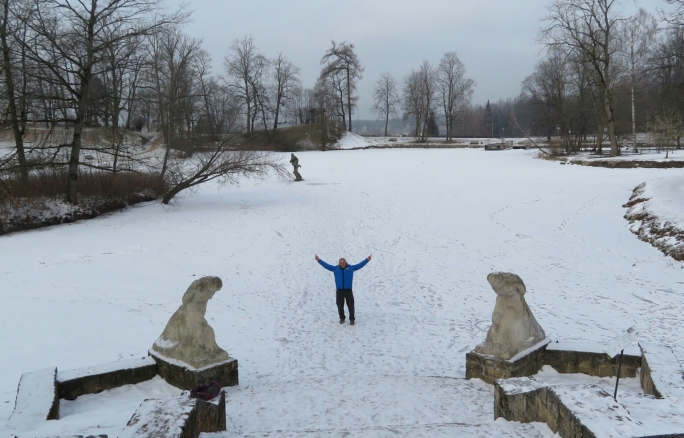 The grounds of the castle were stunning and were covered in a blanket of snow. 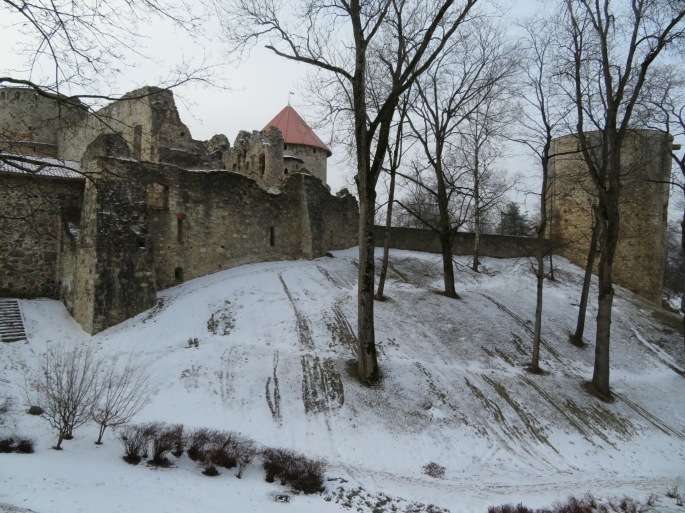 I’d taken a bottle of water, some sandwiches and an orange each for our lunch.  For those that don’t know the relationship I have with my husband Kev, it is very sarcastic,  but playful.  If you didn’t know us and heard us talking you’d think we didn’t like each other. Haha

We ate our sandwiches and Kev asked for a drink of water. I handed him the bottle and he looked in disgust/surprise…..”it’s only half full” he says.  “Yes because I asked you if I should bring the other water we had in the fridge or leave it in the hostel ” I replied.  “Well I didn’t know the bottle was only half full you ugly fat bitch” came his response ! Oh he’s so funny. “I’d rather be fat than ugly, you ugly mother… ” 😂😂

We had a walk around the town,  to say it was Saturday it was like a ghost town. The streets were deserted. Again there were more churches in the towns. I’m not in the slightest religious but I do like the architecture of some churches. These look eerie with the jet black trees in front of them 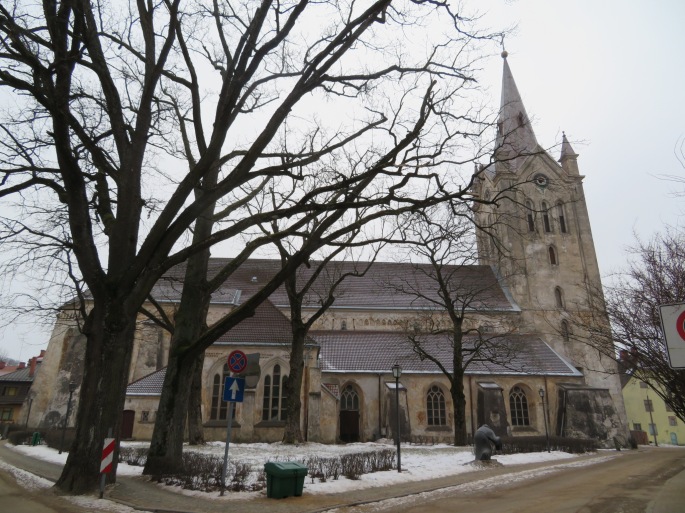 As we walked the snow began to fall ever so gently. As it was so cold (-6) the flakes were freezing individually in the bus shelter glass and were forming intricate patterns

We walked on to the local park and decided to stop and sit on a bench and eat our oranges. The bench we sat on was covered in tiny snowflakes and were starting to freeze so we couldn’t sit in the bench…we didnt have anything on us to sit on so we had to improvise. 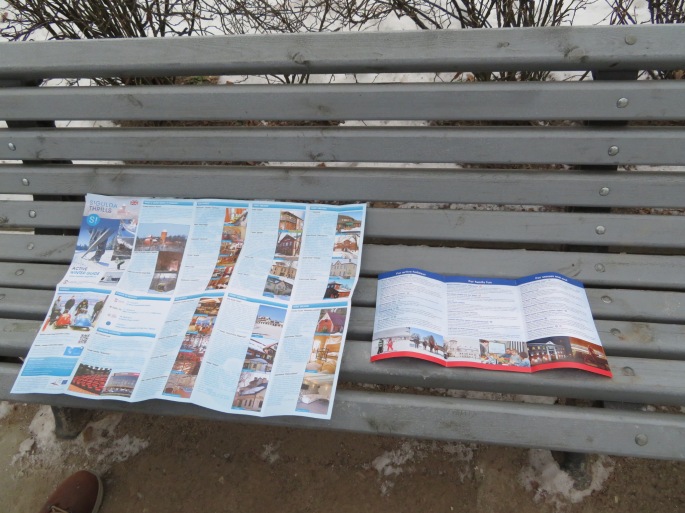 I passed Kev his orange and he looked and said “I don’t peel oranges, you’ll have to do it for me or there’s no point giving it to me!” Haha like I’m really gonna peel his orange for him. When he realised I wasn’t going to be his slave he rolled it away into a pile of snow. ..like a child throwing his toys out of the pram. He laughed and went to pick it up.
We headed back to the train station to get a train back to Riga. Shame we can’t read Latvian, then we might have realised that the train back only goes on a weekday at 4pm, on a saturday its 6pm! Only an hour and a half wait to discover this…

Our last night here then off to Tallin and staying in an  airbnb. At least we won’t be woken up by drunken foreigners at 2am in the morning! That’s the problem with hostels. ….not everyone is courteous. They were slamming doors and talking really loud in the corridors at 2am right through to 4am, after a night on the beer in Riga.

Revenge is a dish best served cold…at 7.45am this morning I got my own back 😀