We had booked a private room in an airbnb place and it was great! At £50 a night it was cheaper than the hostels and we were able to save money by cooking our own meals in the apartment on an evening. Our host,  Heidi, was great too. Very friendly and easy to chat to.

Heidi told us some facts about Denmark we were unaware of. They have put tax into sugar and fat in foods, so basically if you want bread, sweets, crisps, pastries etc you pay a lot more than you would for fruit and veg. They want people to live longer healthier lives.

Also when you buy alcohol, soda in cans or bottles you get charged extra for them. You get money back on them once you take the empties back to the supermarket. This is to encourage people to recycle more. They have a huge recycling plant too, so you know it isnt going into landfill. They are actually recyling it. Also to make use of the building in another way they have made the too, a ski slope.  Interesting stuff right? 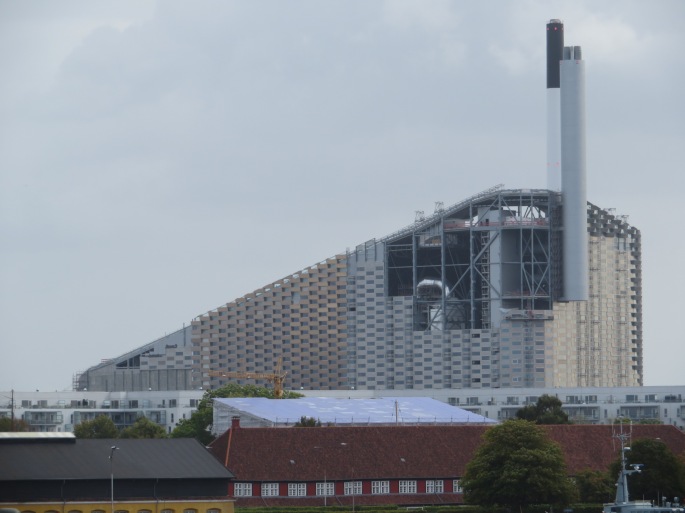 Anyway back to Copenhagen. If I thought Stockholm was bad for bikes then here is far worse!  There’s hundreds lining the streets. Every household member has at least one bike each. They have priority on the roads, have a full bike lane throughout the city and will take a pedestrian out without batting an eyelid! They’re lethal.  This is a load of cyclists at the traffic lights

A cycle park above. You have to fight for a space in the city.

We went to visit a quite famous place in Copenhagen called Christiania. It is a hippy community which started squatting in some buildings in 1971 and never moved out! It’s known locally as Freetown. As you can imagine it’s like being back in the 70’s with all the drugs, drinking, dirty clothes etc.

You can buy any type of hash/weed in this place and it’s smoked openly. We sat watching a band play and just people watching. The amount of people smoking giants spliffs was unreal! Lol

The atmosphere was light and friendly so we sat in the baking sun with a bottle of water getting high off the fumes from the joints! 🤒

We went to one of our favourite places…a street food venue 😀 it was fun and quirky offering all different kinds of foods. It was still expensive though, for street food. A meal was averaging about £10 – £12. We had a nosey around and went to sit outside in the chairs overlooking the canal. 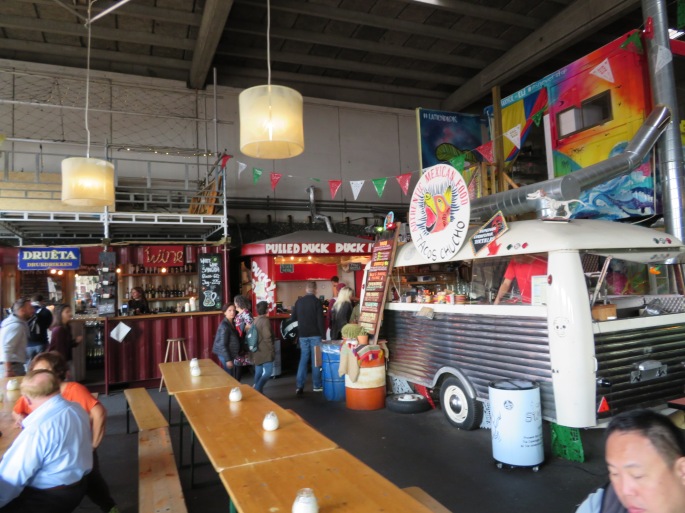 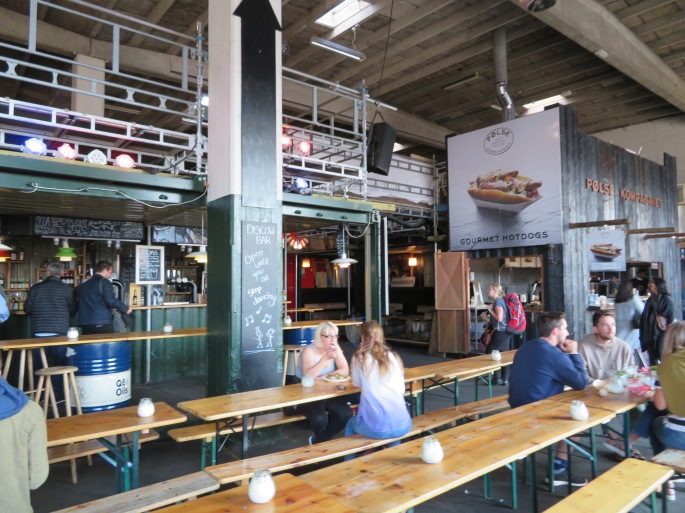 The city is full of life with streets filled with shops,  restaurants, bars and department stores. We explored a lot of the city on foot and each area was a hub of activity with plenty to see.

We were walking down one of the streets looking in shop windows, and one shop had some jeans outside with a sign saying “no I haven’t lost weight I bought these new skinny jeans”. A shop assistant was just coming out if the shop to tidy the pile of jeans up when Barnsley Bob (aka Kev) pushes me towards the woman and says “ere can thee do owt wi’ her?” Luckily the woman didn’t understand his Yorkshire accent and just smiled. We walked off laughing our heads off. He wouldn’t get away with half the stuff he does if it wasn’t in his South Yorkshire accent.

One of the things that attracted us to Copenhagen was a photo we’d once seen of a colourful street lined with yachts and boats. We went to find it and it was gorgeous, the street is lined with restaurants and bars with a load of tourists sat outside them! Bloody tourists 😂

For our 31st wedding anniversary Kev wanted to watch a football game, and I said I’d go, even though I don’t like football. The atmosphere at European games is usually loads better than English ones.  We weren’t disappointed. The fans have someone that stands in front of the main area to encourage them to sing and chant. This guy had a microphone and the crowds were singing at the tops of their voices, cheering their team on to a 4-0 victory. The crowd were singing football songs to the tunes of Boomtown Rats “I don’t like Mondays”, Culture Club “karma chameleon” and the noahs ark song “animals went in 2 by 2”. It was very strange 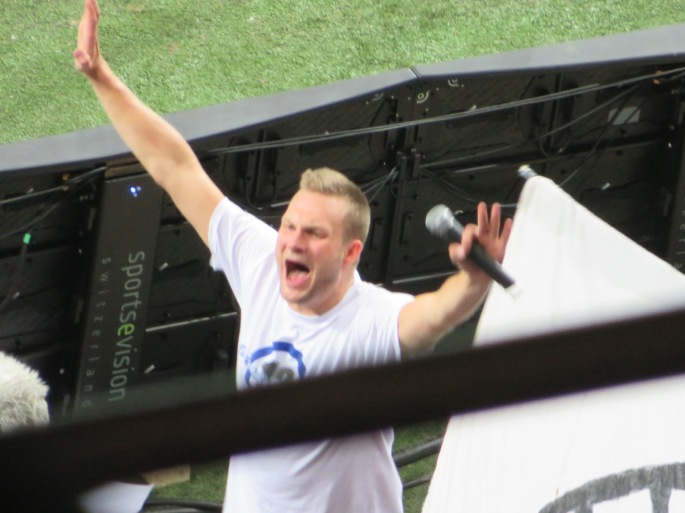 The bar in the stands were serving beer which was ridiculously expensive at £10 per pint but people were buying it and they even provided little cardboard crates to carry it in.

The following day we went off to see the palace and ended up walking the streets with the guards and the band all donned in their smart uniforms and freshly brushed busbys. The locals were out videoing it so it must have been quite rare.

The city offers some fantastic buildings. There is a modern art museum which was covered on the outside with old sacks

We took a walk to see the famous Little Mermaid which was donated by the owner of the Carlsberg conglomerate. (The photo of this is the one at the top of the blog). Then we noticed a little village just opposite so went for a nosey. It turned out to be the local army barracks. It was really colourful and they didn’t mind us having a wonder around. 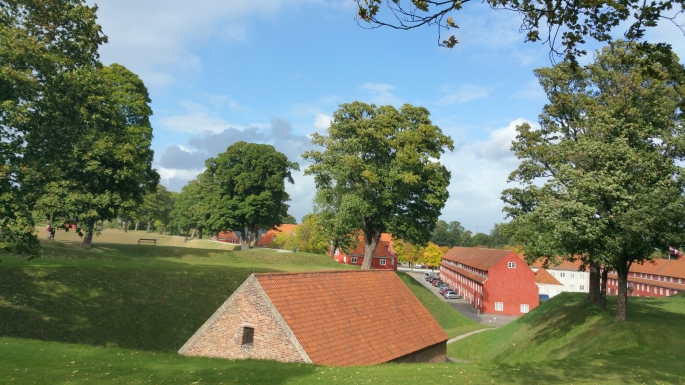 On the way out of the barracks we passed a gorgeous water foutain. 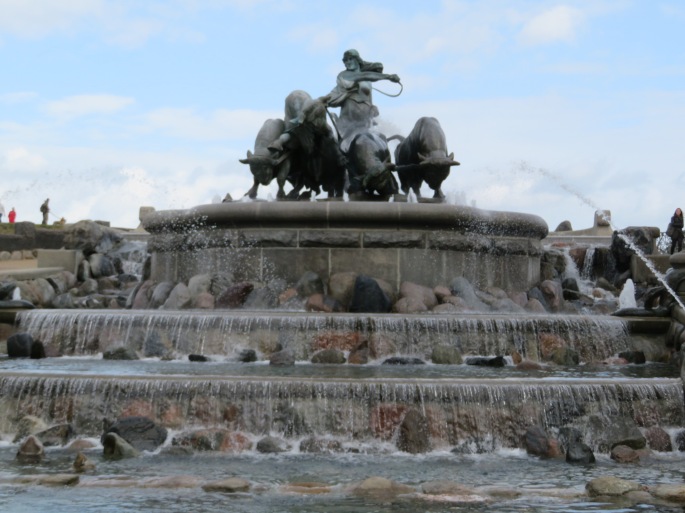 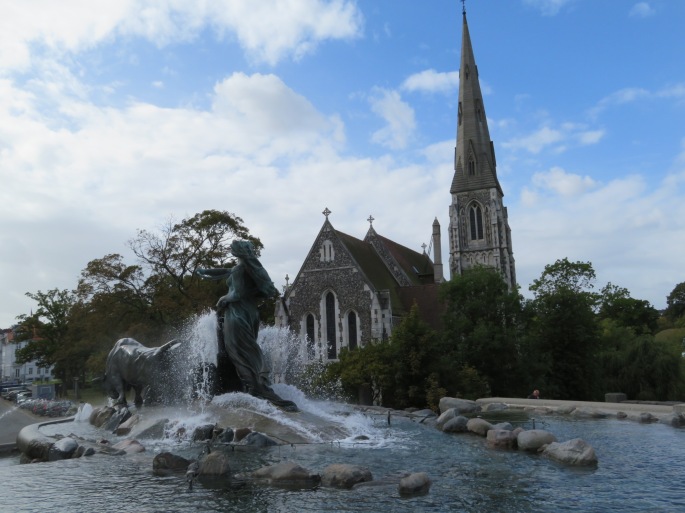 We were tired and decided to head back to the apartment and have a few cheeky drinks on the balcony before we cooked dinner. Instead of doing our 1 hour walk back to the apartment we decided to get the train. We couldn’t find where to get a ticket so hopped on and hoped the inspector didn’t get on. Lol we made it the 4 stops and saved £6. I think we’re getting worse the older we get for taking risks and being silly. We giggled like a couple of teenagers as we strolled off the train.

The city is quite stunning and if it was cheaper I would probably go back. There ar too many places in the world to see so there’s not many we go to more than once to visit.  We’ve been to New York 4 times, Iceland twice, and will definitely be going back there again, Santa Monica in LA and Miami.

The 9 weeks of travelling is now over and we’ve loved it. The camping in Arizona and Utah was a highlight but the best by far has to be Iceland. It blew our minds….and there’s loads we haven’t seen of it ….yet!

We have a couple of jaunts coming up in the near future but nothing as adventurous. We need to get the house sold now so the full time travelling can begin.

Thank you for following us and I hope you’ve enjoyed the blogs.