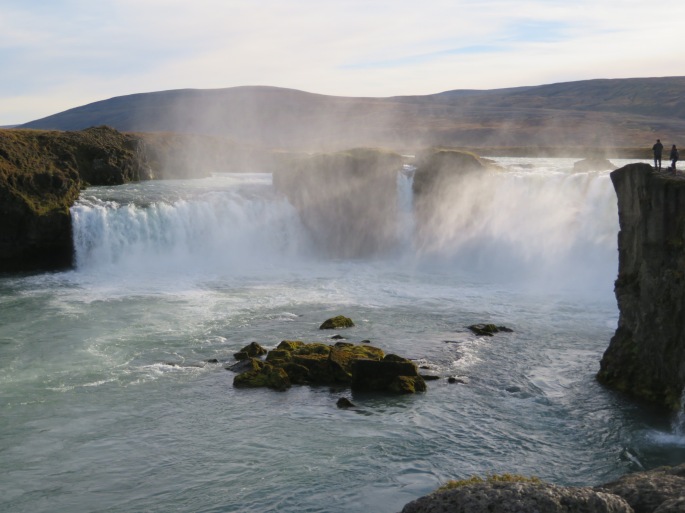 INCREDIBLE ICELAND. If you’ve enjoyed my photos on facebook, there are others on here.

We have been here before but only to Reykjavik and it gave us a taste to see more of this amazing country. We planned to travel the whole 800km of the ring road, that snakes around the outskirts of the island, but there are so many beautiful vista points, we decided not to rush it and will come back to see the rest at a later date.

The air is fresh and crisp, the water in the sea is clear and the countryside has some spectacular views with terrain that change round every bend in the road. We have done some scenic drives in the past but this has to be the most scenic we have done. We were constantly saying “wow” 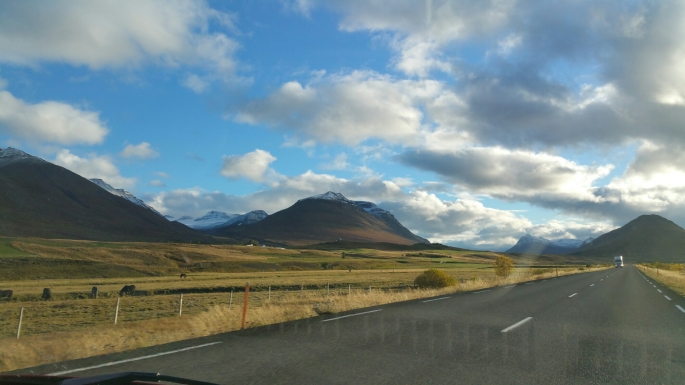 I love clouds and how they form different shapes in the sky. It was grey and overcast when we arrived so it made the clouds have an eerie and moody feel to them. It was like 50 shades of grey! 😉 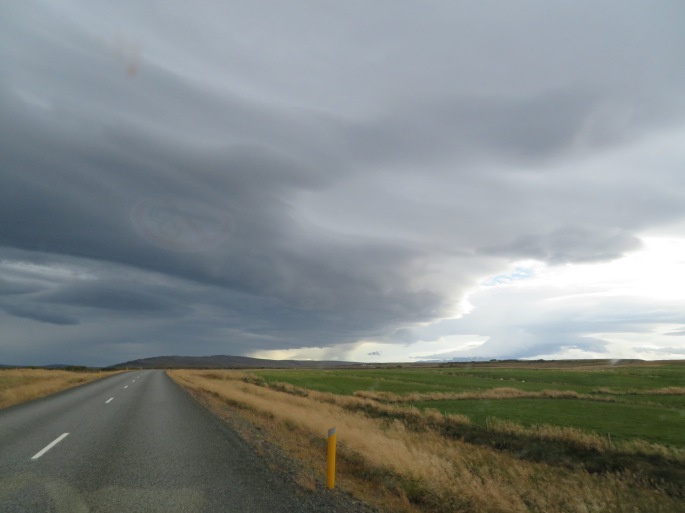 Iceland is known for being one of the windiest countries, but we were prepared with our thermal long johns and warm coats. The wind blows fast and strong but it was the scenery that took our breath away. Mountains, volcanoes, fjords, glaciers, lakes. You can’t get bored driving in this country.
The roads are mostly tarmac but then suddenly the tarmac ends and the dirt/gravel road begins and as you are trying to dodge the pot holes you wonder if it would have been wiser to get a 4×4 rather than a little Postman Pat van! 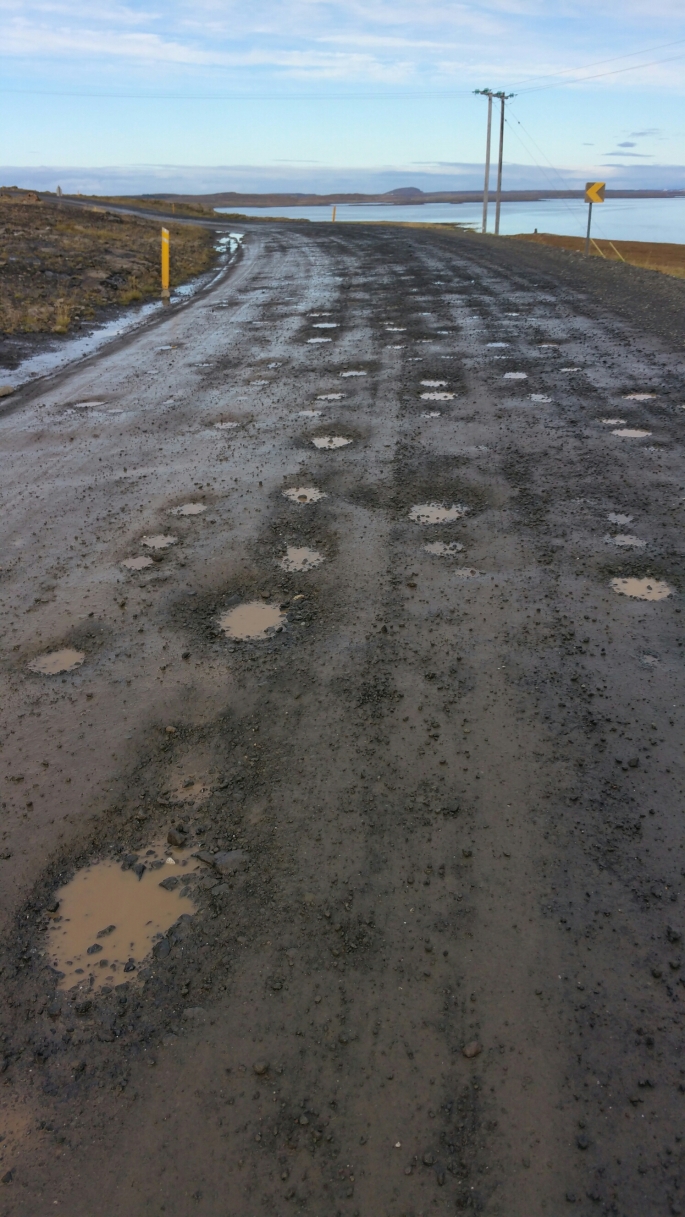 Our campervan may have been compact but it had every thing we needed, sofa, bed, cooker, fridge/freezer, sink with cold water on tap, a frying pan, saucepan and crockery! You didn’t need to get off the sofa to go to the kitchen haha. We could get to the fridge and cooker whilst sat looking out of the back doors into our garden, which changed on a daily basis! 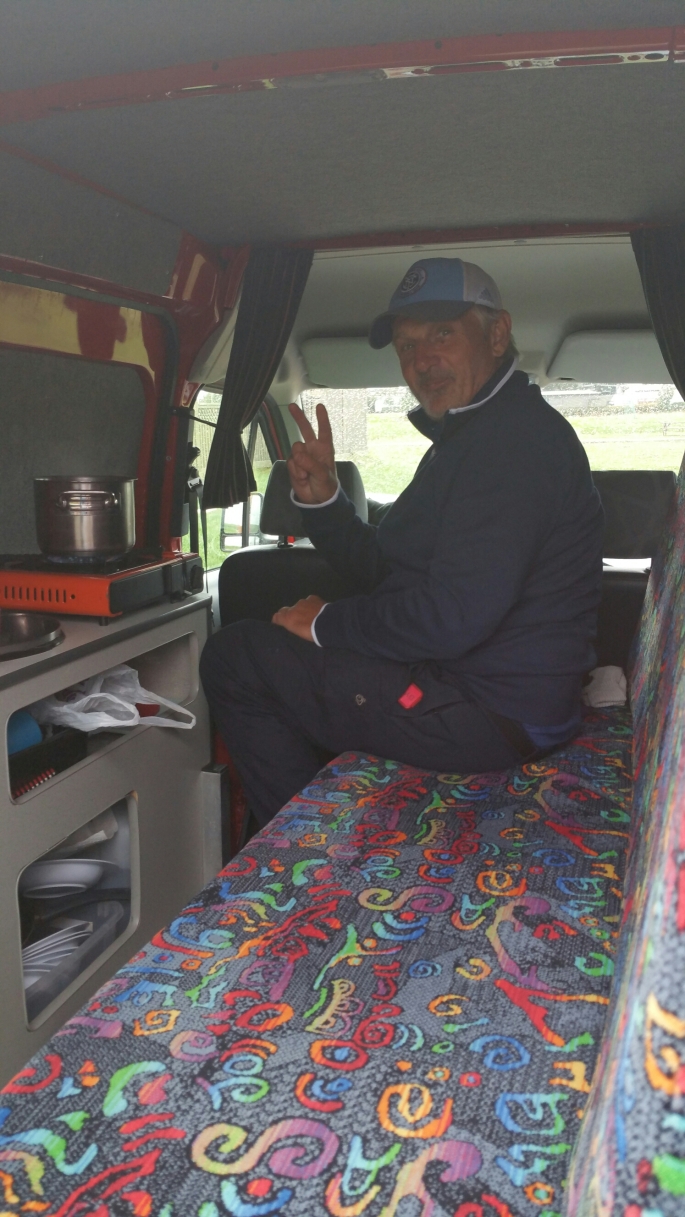 We knew it was going to be expensive eating here so we had bought packets of dried flavoured pasta and rice with us. We had enough provisions to last us a week.

When we went to collect the campervan, the offices had some storage shelves filled with items that other campers had brought back with them, unused. There was a sign that said “Free, just take what you want and smile”. Whilst Kev and 2 other couples had their orientation tour of the van I got first pickings at the free food! Haha I filled a bag with granola, 2 tins of chicken breast meat, jam, hot chocolate, cheese filled tortellini, dolmio pasta sauce and a cinnamon bun! Haha we were going to live like kings, on a shoestring. I took the food and smiled a big happy smile 😆 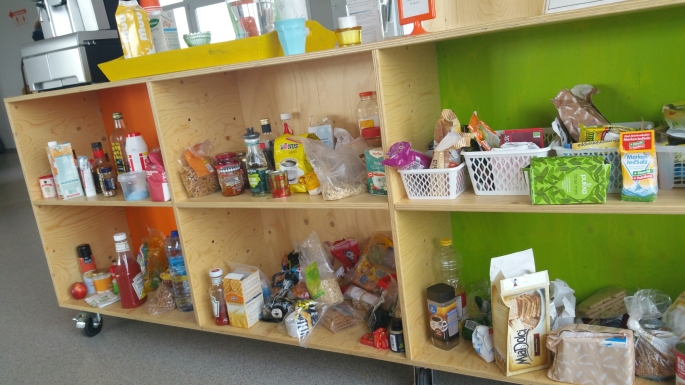 The Icelandic people live off, and use the land to the best advantage. They have hundreds of horses roaming the mountains and fields with their unique velvet type fur and long thick mane. The horses here can only be Icelandic..no other breeds are allowed in the country and if someone takes a horse out they are not allowed to bring it back to Iceland, in case it has been in contact with other breeds.

As cute as these animals are, the locals eat them. The younger ones have the more delicate meat so I’m told!

The houses are beautiful and very much the same in every town. White or black with a brightly coloured roof. Some can be very remote, up in the mountains, but they have awesome views from their windows. There is normally a little wooden church in the middle of them too. Some of the towns have a population of as little as 450 people, so the church is usually tended to by the local farmer/vicar. 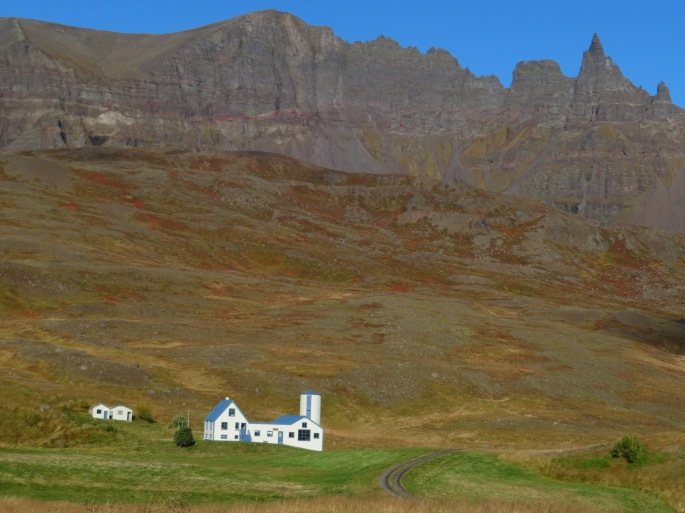 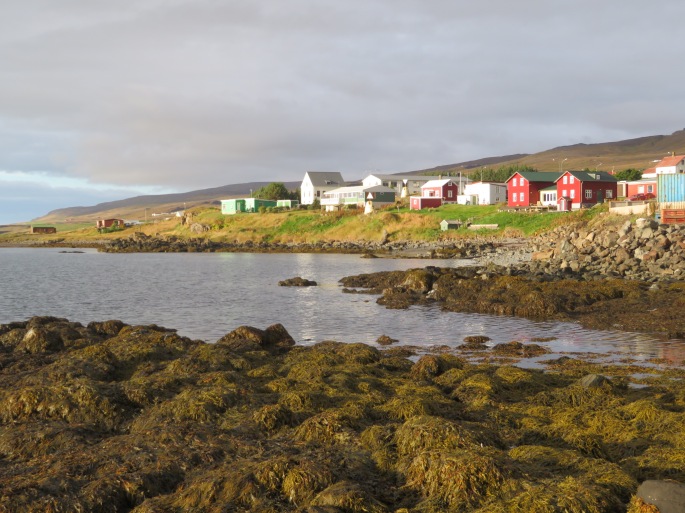 The houses are heated by geo thermal energy. They have power stations that pump the naturally hot water that is underground.you can see it coming up through the ground in huge plumes of smoke. The water is fed through pipes to reach all the houses, to be used as heating and for washing. It smells a bit like sulphur but your always guaranteed a hot shower!

The coastlines offer great views with lava rock formations jutting out and blue crisp Icelandic water crashing against them. It really is breathtaking 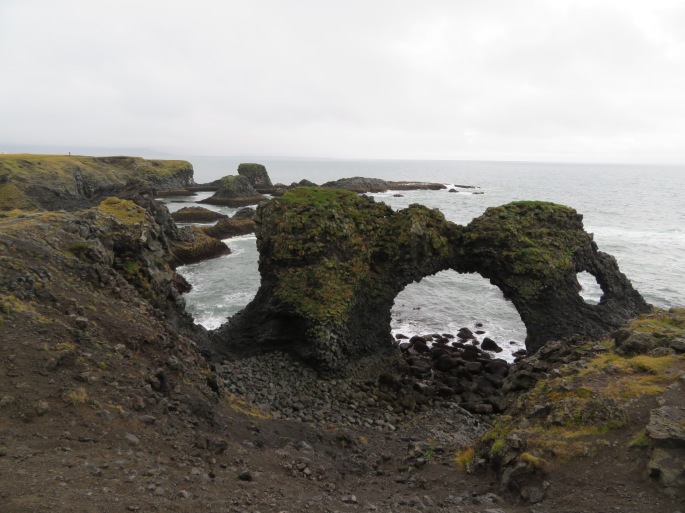 The inland water is bright blue and there is usually a mountain to one side of it and various types of birds flying over or resting on it.

We have seen seals, whales, sheep, pigs and horses. All beautiful in their own way. The sheep are probably the fattest I’ve seen…and they only eat grass! They come in a multitude of colours but as with the horses they are all the same breed 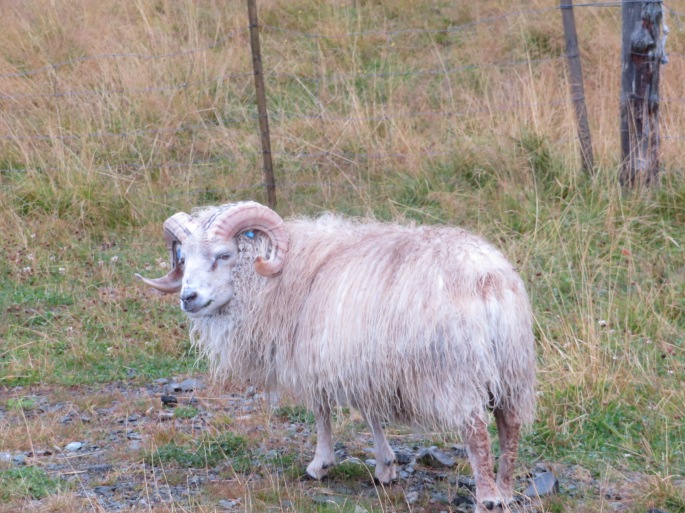 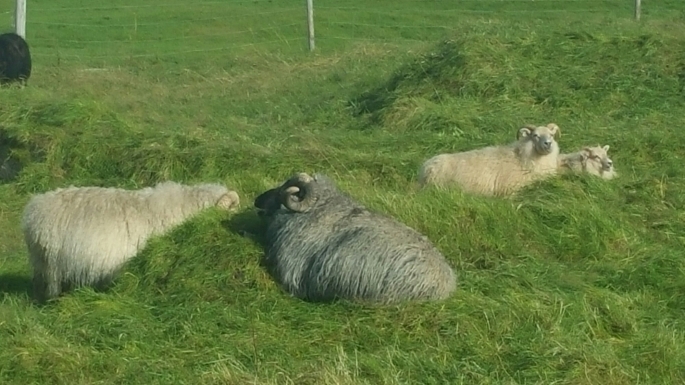 We got chased by 2 pigs when we went to see a church. They just came running towards the van lol. I think they were just being playful because as soon as they realised we weren’t bothered they went to annoy the horses, which head butted them and soon put a stop to their game 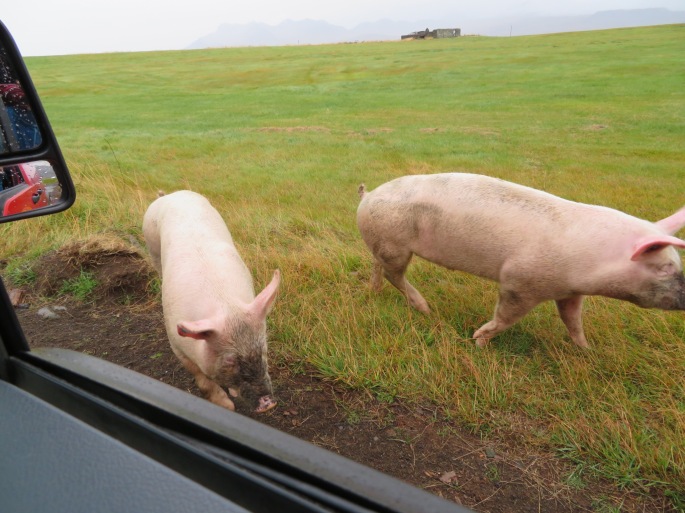 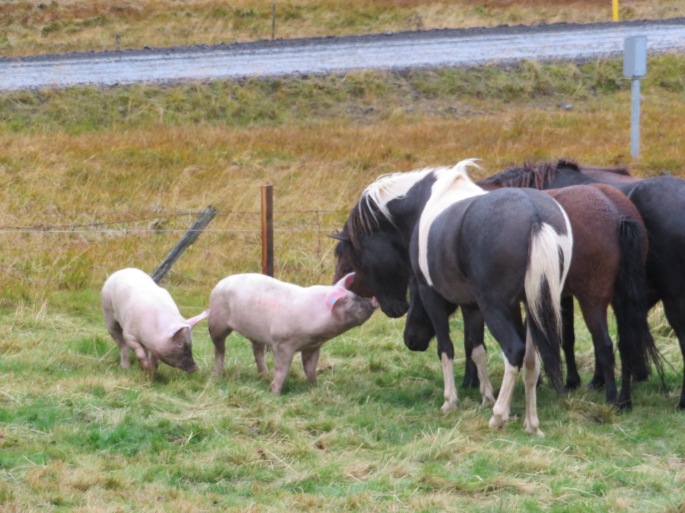 The seals are beautiful. Their big dark human eyes just staring at you whilst they lay on the rocks. If their fur is dark it means they are still wet and not been out of the water long. Whereas if they are white they have been basking in the sun and it has made their coat lighter.

The whale trip was outstanding! Mega expensive (£264) but we treat ourself for our anniversary. We were sat on a jet propelled dinghy which had seats like a motorbike that you straddled. It flew through the water and got really close to the whales. We were given flotation suits to keep us warm and afloat incase we fell in! 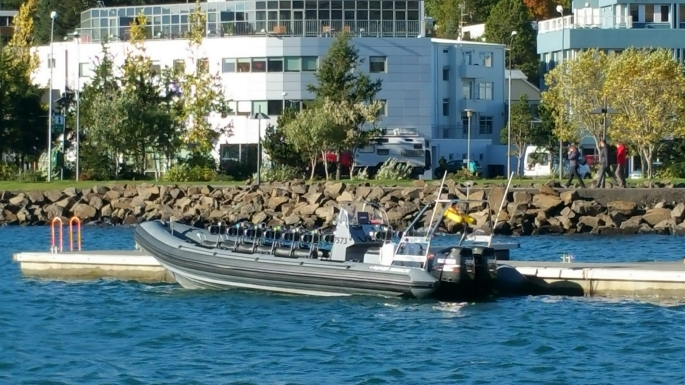 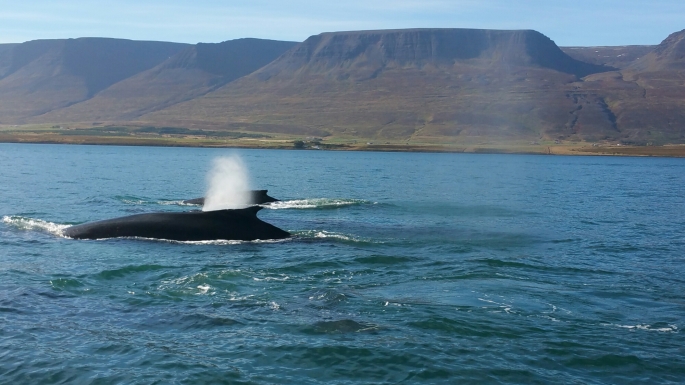 The scenery as we glided over the glass like water in the fjords was incredible, with snow topped mountains in the distance

We’ve had loads of laughs whilst in Iceland. We’ve “roughed it” for 7 days, wearing clothes for 3 days running then taking them into the showers to wash them with the free shower gel! We’d dry them on the dashboard or out of the window whilst driving along.

We’ve spread jam onto dry bread with a knife and used the other end to stir the coffee. We really had to think about the best way to cook on our one ringed stove. We’d cook pasta in water and drain it into the sink to wash up with as we only had cold water in our tank. We’d then wash all the pots up with bio degradable liquid, empty the sink and it would all drain out under the van and onto the road!

Camping on the sites was quite cheap at around £9 each per night but to hire the campervan was expensive at €144 a day so we needed to save money. We stayed on a couple of sites but “wild camped” mostly. We would just drive until we found somewhere off the side of the road. We always woke up to beautiful views though, where ever we parked and it was always free 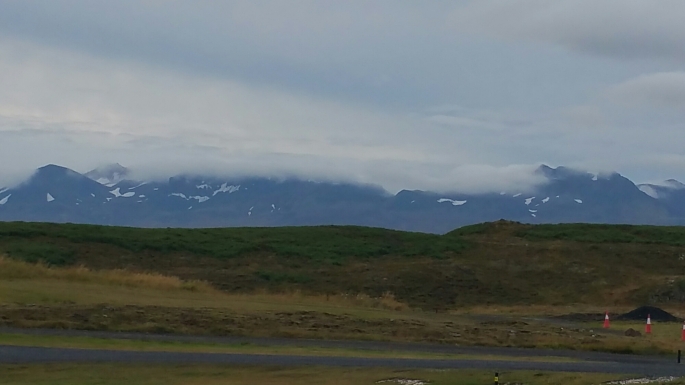 The natural tourist attractions in Iceland are all free. You don’t need to pay to see waterfalls, thermal pools or volcanoes etc. You just pull up and explore, so it’s more cost effective to hire a car and see them yourself, than pay for a tour company to drive you there and charge a fortune. We’ve seen some spectacular sights and all for free. A yorkshire persons dream 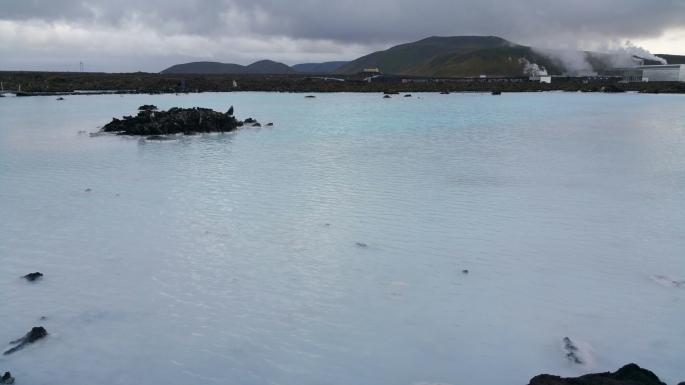 Heated natural pool in a cave

A walk around a lake

Most powerful waterfall in Europe 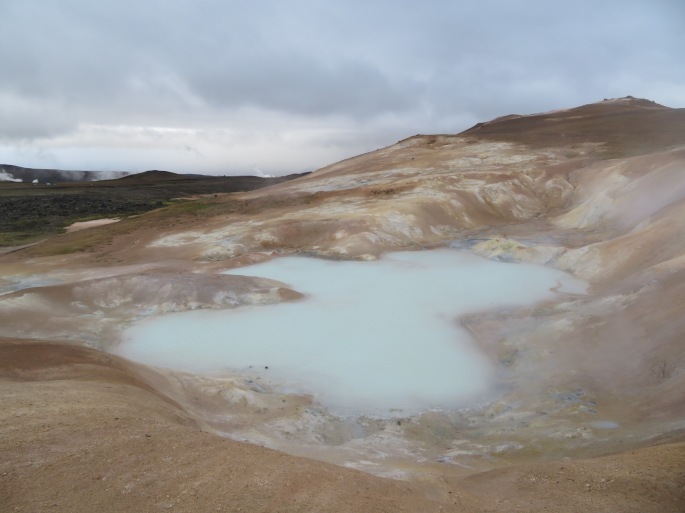 We have seen some breathtaking sights, too many to put on here. We have had a fantastic time, as we always do together. We’ve laughed, acting like teenagers running round photo bombing people’s pictures, Kev saying “kum bah” to the locals as they walked past?!? It doesn’t even mean anything in their language! Lol

We went to visit a volcano crater. We’d taken our padded jackets and had shower proof trousers, hat, gloves etc. It was about 5 degrees and a howling wind. We set off in the “path”. It was like being on another planet. We were the only people there, with no signs showing us where to go, only the odd stick stuck in the ground with a yellow stripe on the top. I wanted to turn back as we had to take a large step over a gaping crevice but Kev held my hand over it and we carried on. Then it starts to rain. My coat didn’t seem to be waterproof so I was slowly getting wet. The wind blew.strong then the hailstones came! Oh dear, my face and thighs were stinging from the cold and the hailstones hitting my cheeks. I was panicking as we didn’t know where we going except climbing up this volcano. Kev was peeing himself laughing at me. I had vision of us being stranded and I just wanted to go back to the campervan.

We didn’t know if we’d have to go back the way we came or just carry on until we saw some kind of civilisation again! We carried on following the sticks and it took us back to a boardwalk that led to the car park….no volcanic crater in sight. All that for nothing. We laughed about it after I’d been and put my thermal long johns on and dried my coat out. My face and legs felt on fire. Kev thought it was highly amusing

The terrain and scenery changes so quickly in a short distance here. We woke up around a lake, with heather the colours of New England in the fall to then drive 8 mins down the road and it was moss covered lava rock, then it changed to green mountains, then lakes! As I say you don’t get bored of the scenery 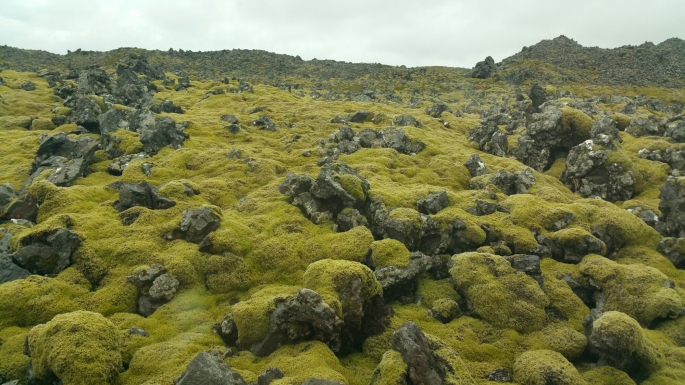 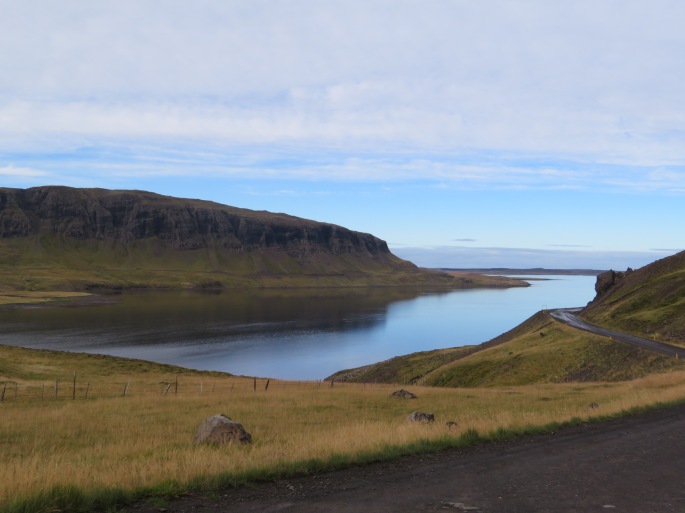 I could go on and on about this amazing country. We are going to come back later to see the rest of it. For now, the campervan has been returned, we are spending a night in a private room hotel/hostel near Keflavik airport before we fly on to Stockholm in Sweden tomorrow morning. Looking forward to seeing the city but not looking forward to sleeping in a 6 bed mixed dorm hostel that Kev has booked us into!!!!! 😲

One thought on “Incredible Iceland”