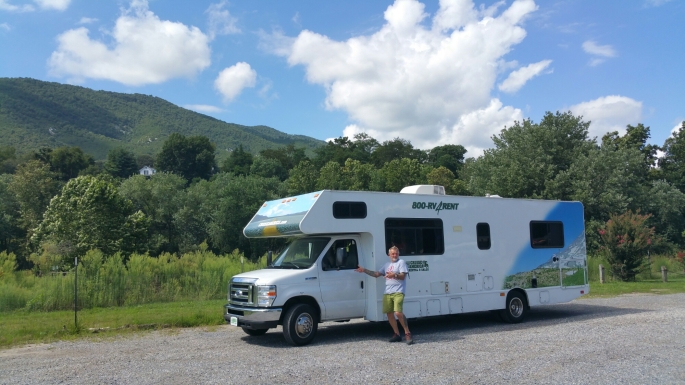 After driving most of the day we arrived at our campsite for the night in Fancy Gap, Virginia.  This part of the country is beautiful and definitely worth another visit but maybe not in a motorhome.

It’s too big and cumbersome to get into the quaint little towns and the campsites are usually about 10 miles out of town.   The views from the road are breathtaking and the towns are small and welcoming.

We woke up the next morning to be greeted by a very friendly deer. It kept looking through our motorhome window waiting to be fed. The only thing I had in was a bag of mixed nuts and raisins so I sorted the raisins out and gave it some. It loved them! In fact it loved them so much it came up to the motorhome door wanting more! Haha

We had a 350 mile journey this day so set off early to get to our campsite in Savannah, Georgia.  The journeys were broken up half way by stopping at some none descript  town for lunch before heading off again. A game of cards was played along the way, called “shithead”, I’ve never heard of it before but it’s quite good. It passed the time whilst travelling and fighting to stand up to close the doors of the fridge we’d left open (blueberries all over the floor) or trying to stop the drawers from flying open! Haha. All these things are handy to learn before we get one if our own.

Our little campsite in Savannah was stunning with a huge lake on the edge of it which was home to 10ft aligators, 6ft snakes, large turtles and surrounded by swans and geese.

Me and Carol went for a walk around the lake and got talking to a lady called Sunshine Frost that was kayaking on the killer creature infested lake with her 2 year old son in the front of it! 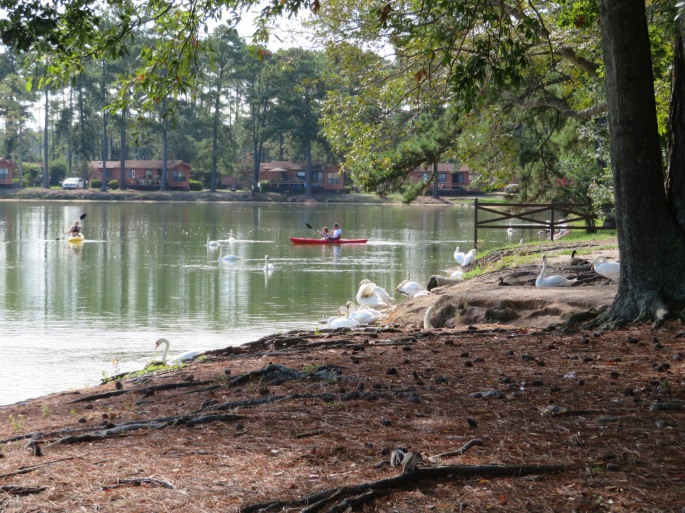 She was telling us that there were fresh water clams just below the surface of the sand bed and to try harvest them. Hmm do we really want to wade out into the water for clams? Sunshine guaranteed us that the crocs would eat the swans and geese first, as they taste like chicken! Shoes off and in we went digging in the sand bed with our fingers 😁.

Kev and Jeff decided not to come to the lake with us but they were lucky enough to be greeted by an armadillo! A local.told.us not to touch them as they carry leprosy. Never knew that. They’re quite cute in an ugly way.

We found about 30 clams, took them back to the motorhome, cleaned them and froze them for another day.

The Americans on the campsites are so friendly. They’re really interested in talking to us when they hear our English accents. According to our new friend, Sunshine, America is the rebellious younger brother to the UK.   We’ve been told we sound Irish, Welsh, Scottish and the most common one…Australian! A lot of Americans live full time in their rv’s on the sites and they set themselves up with gardens and outdoor bbq etc. I managed to talk a man into letting us go inside his rv for a nosey (you know me, if you don’t ask you don’t get?) It was bloody huge with pull out sides, a dining room, full ensuite bedroom 2 leather sofas and a 22 inch TV! !

I was excited to visit Savannah as I remembered watching and enjoying Roots as a child. A tv program all about black slavery. I wanted to visit a plantation and hear about the history of the town. There wasn’t a plantation in Savannah so we went to see one in Beaufort, which was close by. I was keen to see the grand mansions and the slave quarters, and be swept back in time to another era.  It seems the tv programs painted it differently to how it actually was. There were no grand mansions and the plantation sites are no longer there. The “Massas” (masters) didnt live in big exotic houses and they didn’t badly treat their slaves. It was the Overseer that treat the slaves badly, and they were usually black themselves   We visited what used to be a plantation  “mansion” in its day, but now it was run down and just another wooden clad house.

The road up to it was tree lined with moss hanging on the branches, as were most of the trees in the city, and this added to the atmosphere and how I imagined it to be.

The town itself was full of architecturally beautiful houses, a lot of them proudly displaying their country’s flag. Can you imagine the uproar in England if we did this with the union jack? It would offend the ethnic minorities…

Even the vets was a gorgeous building, with its white pilllars outside it looked like a grand hotel

Charleston was a much better place to visit than Savannah, it had a large historic district with brass plaques outside the houses telling of the residents that had lived there over the years. You then walked a few blocks and you were in the middle of town with designer shops mixed with quaint boutiques and an array of  restaurants offering different cuisines .

Carol got badly burnt on her legs the previous day, so was suffering. We all wanted to explore the beautiful town but unfortunately Carol’s legs weren’t going to allow her to walk too far. They headed back into town for lunch before taking the motorhome back to the campsite.

Me and Kev walked around the historic district and found some beautiful old houses. It was like stepping back in time. A very memorable place, with a walk along the seafront, spotting dolphins and turtles in the bay 🐬🐢. The sun beating down on us, the cool wind off the water front blowing through our hair….perfect 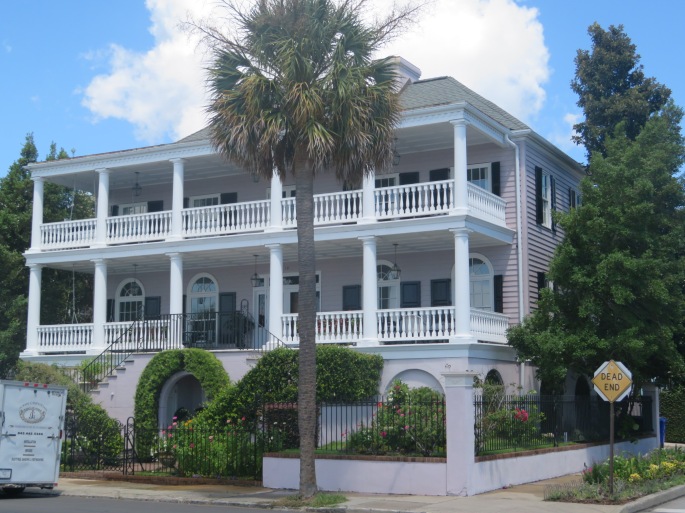 The following day was a special one. A day on Folly Beach, followed by a char broiled (bbq) burger in an air conditioned bar, that was playing songs by Kings of Leon and the Killers, whilst having 4 tv screens showing different sports programmes.  Kev thought he’d died and gone to heaven!  A boat trip to see the dolphins at 6pm finished the day off perfectly . I’ve never been so close to them. They were swimming at the side of the boat and following us as the boat sped off in the crystal blue waters.

As the sun began to set we said our goodbyes to our captain and headed back to our campsite to try the clams we had caught. I Googled how to cook them…prepared the garlic, didn’t have white wine so used water and a herb seasoning haha, waited for them to open and gingerly tried one….yuk.. chewy and bland. Straight in the bin! Good job we had burgers in the freezer as a back up 😆

We sat outside in our camping chairs drinking ice cold beer, with a full moon above us and the crickets twittering in the trees…sounds perfect right?   No! We were getting bitten to death by ninja bugs that were wearing Dr Marten boots! This camping lark is not what it’s cracked up to be 😅🕷🐜

Our final stop in the motorhome was Wilmington, North Carolina. We decided to stop off in a little historic town called Georgetown. It had one street up the middle filled with shops and restaurants offering fresh seafood, sandwiches and burgers.

A turkey Reuben (toasted sour dough bread stuffed high with sliced turkey breast, saukraut and thousand island dressing) with Southern style potato salad (mixed with mayo,dijon mustard and boiled eggs) sufficed for lunch before we travelled for another 1.5 hours to our next campsite.

On the drive we encountered some black clouds that looked like a thunderstorm was on its way. Oh yes. The fork lightening hit the petrol station. This was really scary as it blew the electrics whilst we were filling up! We got a refund on the fuel as it wouldn’t fill up and you have to pre pay for fuel over here. We took the money and drove over the road to shelter in the supermarket and buy dinner. (Southern fried chicken, summer slaw and sweet corn on the cob) 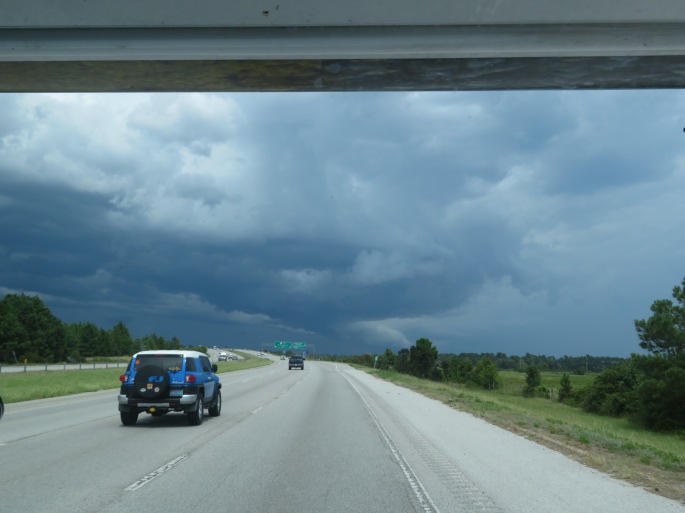 When the storm had calmed and we’d dried off a bit we set off for our last campsite.    Arriving in Ashland  just outside Wilmington, North Carolina we were pleasantly surprised.

For $46 we had a full hook-up (water electric and sewage, cable TV and free wifi ) waffles and syrup for breakfast,  swimming pool, fitness centre and laundry room. Bargain.

Kev and Jeff went into the store and were trying to charm the ladies that worked in there. It obviously didn’t work,  as when me and Carol walked in they asked how we put up with them! Haha

The boys went to watch American football whilst me and Carol sat outside the motorhome, got some wood burning in the fire pit, and sat drinking southern comfort and cold beer whilst putting the world to rights, like only 2 people can that have been friends for 29 years. 😊

The next morning was spent cleaning the motorhome before driving the 80 miles to drop it back off where we picked it up 12 days ago.

To say we had been in such close proximity to each other for 12 days, the 2 families got on well. It’s hard sharing a small space when you each have different habits/ ways of doing things. Sometimes tempers were a little fraught but we’ve known each other long enough to be honest with each other. Any situations were few and far between and never escalated. All in all we rubbed along nicely.

Next stop Miami……oh yeah bring it on!

7 thoughts on “Our little home on wheels…Savannah, Charleston and surrounding areas”